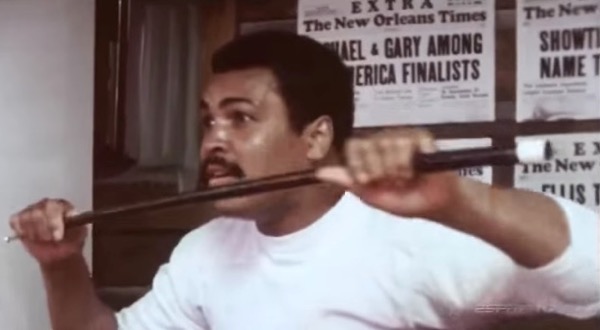 I had no idea Muhammad Ali loved magic. This is a great story about a friendship between a young magician living with the aftereffects of polio, and the world’s greatest athlete.

[Terry] La Sorda took the dare, opened Ali’s pack of cards, and asked Ali to pick a card, any card. Then he gave Ali the deck to put the card back in it without telling the magician where it went. Ali turned his huge back and shuffled the deck.

“He turned around saying ‘You’re never gonna find this card, you’re going to make a fool out of yourself!'” La Sorda recalled.

Then Ali looked up and saw his card dangling from La Sorda’s mouth. Ali dropped the deck in shock.

“The cards fell on the floor and I thought he was going to hit me,” La Sorda said. “One of those huge fists would hit me. Then, suddenly, he’s on the ground, the robe all around him, picking up all the cards … [saying] ‘put another one on me. I like that!'”

For the next two hours, the two men were nose to nose, as La Sorda performed one trick after the other.

La Sorda said that Ali told him that he had asked professional magicians in Las Vegas to teach him magic before, but no one took him seriously. That first night, Ali asked La Sorda who his manager was. La Sorda didn’t have a manager; he wasn’t a professional magician. La Sorda was, instead, an engineer, a burgeoning metallurgist, having first worked with steel when trying to fix a pair of broken polio braces when he was 13 years old.

Ali was surprised, and asked La Sorda how much he made as an engineer. He told him, and Ali said he would double it if he came to work with him, traveling and teaching him magic.

Here’s Ali giving an impromptu performance to some pro wrestlers at an airport: