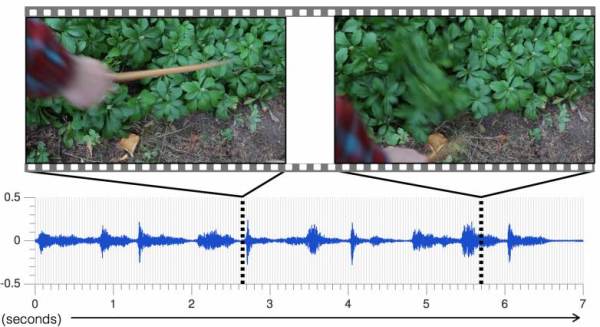 Researchers from MIT’s Computer Science and Artificial Intelligence Laboratory (CSAIL) trained a neural network to recognize materials (e.g., metal grate, plants, concrete sidewalk) being hit with a drumstick, and synthesize sounds to accompany the actions. It did well enough to fool humans into thinking the sounds were real.

Objects make distinctive sounds when they are hit or scratched. These sounds reveal aspects of an object’s material properties, as well as the actions that produced them. In this paper, we propose the task of predicting what sound an object makes when struck as a way of studying physical interactions within a visual scene. We present an algorithm that synthesizes sound from silent videos of people hitting and scratching objects with a drumstick. This algorithm uses a recurrent neural network to predict sound features from videos and then produces a waveform from these features with an example-based synthesis procedure. We show that the sounds predicted by our model are realistic enough to fool participants in a “real or fake” psychophysical experiment, and that they convey significant information about material properties and physical interactions.