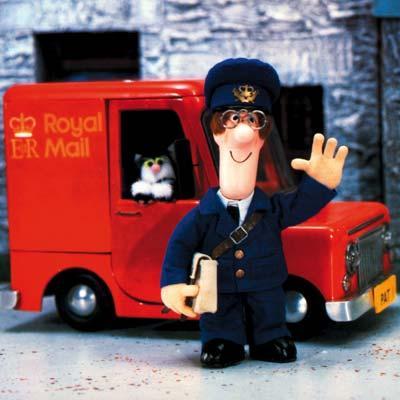 Barrie, who was born Leslie Hulme, provided the voice for Pat and many of the other characters in the animated series, as well as singing the famous theme song. His daughter, Lorraine Peterson, told the Press Association that he died peacefully at home in Denham, Buckinghamshire, of liver cancer.

The show concerned the mundane yet charming adventures of Pat Clifton, a postie in rural England, and his black and white cat, Jess. Most all episodes set out with him delivering mail to the timeless English village of Greendale; his rounds would inevitably be interrupted by some local concern: a lost puppy, sheep clogging a country road, plumbing trouble at the pub, etc.

Wouldn’t it be awesome if they did a new series that homed in, in child-friendly fashion, on the vaguely haunting aspect of all this. Pat just delivering the mail when Cthulhu happens. That sort of thing.

“Pat stared at the writhing mass of tentacles under the old flint bridge for a moment, then remembered he’d only yesterday delivered a box of powerful hexes and charms to the coven up by the old windmill. “I bet they know what to do about this,” he said to Jess. “Otherwise Mrs. Miggins won’t be able to get her subscription to Country Living.”