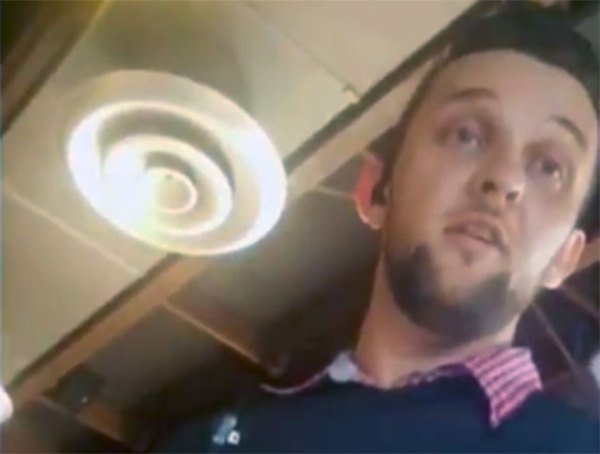 Chili’s advertised free Veterans Day meals for service members. But not for black U.S. Army veteran Ernest Walker, who shot video of a confrontation with a manager who refused to honor the deal. The man came up to his table and took his food from him.

I ordered the waitress was wonderful. It took about 35 mins for meal to come. So when it attived I gave her a Tip as asjed for a take out.

She said sure, at that point a old white guy wearing a Trump flag shirt walked buy me on hi way to the bath room. He came back and aked me what unit did i serve in the 24th. I said no the 25th.

He said he was in world war 2 in Germany and we did not see people like you over there. They would no allow blacks.

I just listened he left then came back to bathroom again and pet my dog. So waitress put foid in container.

Then the managers comes and says a somes guest at the restaurant say that your not a real Soldier. I reply what are you serious what guest.

The manager Wesly Patrick said can I see military ID. I felt that was reasonable I most people ask for that so I shoed him my ID it checked out.

At that point all he should have said was ‘Sir I am sorry Thank you for your service and I would have left.

But instead ge says ‘ tbe guest also says that your service dog is not a service dog. Now that’s when igot upset and started Recording so see for yourself what happened:

I was approached by an old white guy, maybe in his 70s, with a Trump Shirt, at Chili’s on Veteran’s Day yesterday. He asked if I was in the 24th unit, and I said “no the 25th”. TRICK QUESTION. He said he was in Germany, and that they did not let Blacks serve over there. He left to the back, and came back and rubbed my dog Barack, who is a service dog. I was seated and eating my food. The waitress packed the rest of my food in a to go box because I had to go pick up my wife. I got my food and tipped the waitress. Then the Manager, MR. Wesley Patrick, comes from the same area in the back, walked up, and rudly informs me that a guest said that I was not a real soldier because I had my hat on indoors. Other guests heard him. He asked for my military ID, I was calm, and provided it to him. I also provided him with my DD214 which is my discharge paperwork. At that point he should have just said “I am sorry Sir, thank you for your service’ Instead he followed up with “the guest also said your dog is not a service dog.” Barack had his Red Service …read more