Over the last 20 years, nearly 1 in 4 movie theaters have closed. Many people feel the days of the movie theater are behind us, with streaming services like Netflix and Hulu providing premium content from the comfort of home.

In reality, there are more big screens in the United States than ever, despite the lower number of theaters. The days of the small, dollar theater may be behind us but the multiplex is gaining popularity. And it may surprise you to learn that millennials are driving this trend.

But what’s with millennials and movies?

Movie theaters are far from disappearing. Box office revenues have grown over the past three years. In 2017, box office earnings hit a record high at over $40 billion. Of the top ten highest grossing films in history, six were released in the last five years. Moreover, two of these films, Black Panther and Avengers: Infinity War, were out in the first half of 2018 and four are from the Marvel franchise.

Who Goes to the Movies?

The people most likely to go to the movies are millennials who are nearly twice as likely to frequent theaters as any other age group. Common knowledge might say streaming devices are replacing trips to the cinema, but frequent moviegoers actually own more technology than the average adult. From smartphones, tablets, computers to gaming systems and personal assistants, nearly 80% of moviegoers own at least four different types of technology.

All of that tech might not be replacing the big screen, but it’s changing our media consumptions. Millennials and younger adults are the biggest users of online streaming services. Rather than replacing trips to the theater, streaming services are just another way to consume media. Young adults are watching, listening, and streaming more than ever.

Why Choose the Cinema? 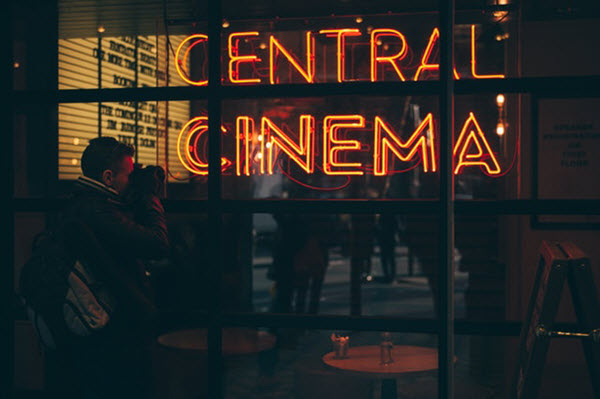 In 2017, more than double the number of Americans went to the movies as those who attended major-league sporting events and theme parks combined. These 1.2 billion moviegoers picked an outing that costs less than half the price of visiting an amusement park or basketball game. While the price of tickets is going up, movies are still an affordable option for those looking to treat themselves to a little luxury.

Compared to the cost of installing a professional-quality theater at home, a family of four could visit a luxury theater every month for 9 years and still spend less. Movie theaters are adding to the luxury with more amenities as well. Adjustable, reclining seats offer comfortable seating with more elbow and leg room than traditional theaters. And many theaters offer dine-in options or full-service bars that give you dinner-and-a-movie all in one place.

What’s So Great About the Big Screen?

Seeing a movie in the theater isn’t what it used to be and it’s not just the seats that are getting better. Theaters are switching from old, film-based projection systems to digital screens that offer better, brighter pictures. And new 3D technology makes movies more life-like.

The latest tech dual-laser projection brings a film to life with brighter displays, more vivid color, and a million-to-one contrast ratio. Today’s screens can display more nuanced tones and a greater spectrum of colors for the ultimate theater experience. What’s more, the newest and greatest technology can be added to existing screens, from the big screen to your home computer, with little more than a firmware update.

Surround sound is making strides as well, with 64 speakers installed on each wall of the theater. There’s even newer theater tech that does more than just place sounds in different speaker channels, like earlier versions of surround sound technology.

This new tech allows filmmakers to place each sound in a specific location in the theater, creating soundscapes that are even more nuanced and creating the same effect across theaters with varying speaker setups. Sound can pan around the room, moving seamlessly from speaker to speaker.

Check out this infographic to learn more about millennials at the movies and the numbers behind the big screen’s continued success:

If you want to make your week as easy as possible, spend some time on Sunday making a few batches of simple weeknight staples that can serve as building blocks for meals in the coming days.

You’ll spend the rest of the week looking back and thanking yourself for these well-spent couple of hours.

Glenn Close was frightening as Cruella de Vil in the 1996 live-action film 101 Dalmatians.

Not these days. Close was covered in puppies on The Tonight Show starring Jimmy Fallon, thanks to her superior general knowledge skills during another edition of “Pup Quiz.”

Close battled Stranger Things’ Finn Wolfhard in the segment on Monday night, picking up a whole heap of dang adorable goldendoodles along the way.

And boy, doesn’t she love it. Read more…

SpaceX is sending of one of newest Falcon 9 rockets back into space for the second time this early morning U.S. time.

The Falcon 9 ‘Block 5’ rocket is designed to be able to go into space and return 100 times, but these are early days. The rocket leaving today is taking Indonesian satellite Merah Putih in what will be its second trip — a re-flight — into space. If all goes well and the SpaceX robotic drone successfully collects the rocket off the Florida coast as planned, then this particular vehicle will be the first Block 5 to manage a repeat lift-off following a previous trip in May.

The next major focus for the firm is to reduce the preparation time and cost required between the relaunch of rockets. Obviously, there’s plenty of benefits for faster turnaround time and the cost-savings associated. But first thing is first and the vehicle out today could become the first Falcon 9 to go into space three times.

The launch happened a few minutes ago, but you can keep up with progress via the SpaceX live feed above.

A rebound in battered Chinese stock markets on Monday helped lift Asian equities, which also drew support from earnings-led gains on Wall Street in a welcome relief for investors grappling with an intensifying Sino-U.S. trade conflict.

Chinese state media kept up their criticism of U.S. President Donald Trump’s trade policies, with a newspaper on Tuesday describing as “wishful thinking” Trump’s belief that a fall in Chinese stocks was a sign of his winning the trade war.