Yes, you can get busted for scooting while drunk.

With scooters swooping into more and more cities, it’s no surprise that people are behaving badly on the electric devices. E-scooter rental company Bird celebrated its first anniversary earlier this month with 2.1 million riders in 100 cities. That’s 10 million rides.

But not all those rides have gone smoothly. Just this week Los Angeles had its first DUI case involving an e-scooter. The Bird scooter driver was three times over the legal limit when he crashed into a 64-year-old pedestrian, who fell to the ground, scraping their knees. Twenty-eight-year-old Nicholas Kauffroath rode off without helping the pedestrian. Read more…

Even if you never log into Facebook itself these days, the other apps and services you use might be impacted by Facebook’s latest big, bad news.

In a follow-up call on Friday’s revelation that Facebook has suffered a security breach affecting at least 50 million accounts, the company clarified that Instagram users were not out of the woods — nor were any other third-party services that utilized Facebook Login. Facebook Login is the tool that allows users to sign in with a Facebook account instead of traditional login credentials and many users choose it as a convenient way to sign into a variety of apps and services.

Third-party apps and sites affected too

“Now that we have reset all of those access tokens as part of protecting the security of people’s accounts, developers who use Facebook login will be able to detect that those access tokens has been reset, identify those users and as a user, you will simply have to log in again into those third party apps.”

Rosen reiterated that there is plenty Facebook does not know about the hack, including the extent to which attackers manipulated the three security bugs in question to obtain access to external accounts through Facebook Login.

“The vulnerability was on Facebook itself and we’ve yet to determine, given the investigation is really early, [what was] the exact nature of misuse and whether there was any access to Instagram accounts, for example,” Rosen said.

There, you’ll want to browse the activity listed to make sure you don’t see anything that doesn’t look like you — logins from other countries, for example. If you’re concerned or just want to play it safe, you can always find the link to “Log Out Of All Sessions” by scrolling toward the bottom of the page. 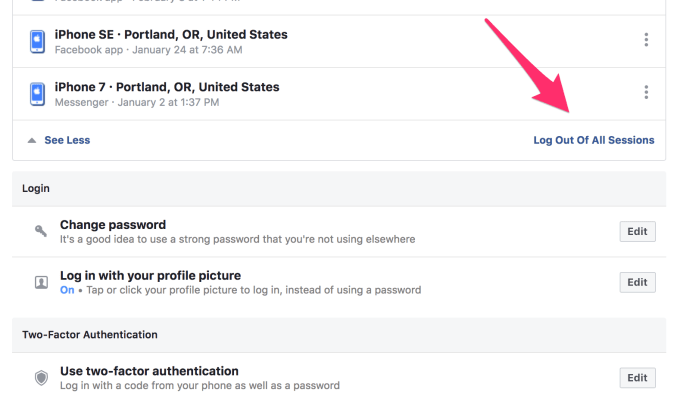 While we know a little bit more now about Facebook’s biggest security breach to date, there’s still a lot that we don’t. Expect plenty of additional information in the coming days and weeks as Facebook surveys the damage and passes that information along to its users. We’ll do the same.

The key to being first-to-market? Working to create products that service the public by listening to their needs. Facebook CEO Mark Zuckerberg has always been working to get his products to the public as soon as possible. This episode is narrated by Masters of Scale Host Reid Hoffman (LinkedIn Cofounder, Greylock investor).

This editorial series is created by Mashable & Masters of Scale and sponsored by Skillshare, the online learning community. Get 2 months of Skillshare classes for free by visiting this link → http://skillshare.com/masters Read more…

Ever wonder what balsamic vinegar is and how it is made? Here is an in-depth guide to all things balsamic — traditional balsamic vinegar, Balsamic Vinegar of Modena, balsamic glaze, and more.

The U.S. Securities and Exchange Commission accused Tesla Inc Chief Executive Elon Musk on Thursday of fraud and sought to remove him from his role in charge of the electric car company, saying he made a series of “false and misleading” tweets about potentially taking Tesla private last month.

A flotilla of small boats rescued all 47 passengers and crew from an Air Niugini flight that crashed into the sea short of the runway at an airport in the tiny South Pacific nation of Micronesia on Friday, the airport’s manager said.

Londoners fed up with Brexit can vent their rage with a special gym routine that includes high-intensity exercises like pummeling punchbags bearing photographs of some of the main players like Boris Johnson and Jean-Claude Juncker.

Earlier this month, media startup Tech In Asia surprised its readers when it announced plans to implement an $18 per month paywall. More expensive than packages for the Bloomberg and the Wall Street Journal, the subscription went live this week. It’s designed to make the business self-sustaining after a tricky period of business in which the company contemplated an ICO and was forced to make cutbacks to its team.

The Singapore-based company — which operates a popular blog and events business in Southeast Asia — laid off as many as one-third of its staff after it went back on a plan to raise money from an ICO, according to documents reviewed by TechCrunch and multiple people familiar with the situation.

In July, as the company scrapped its ICO plans, Tech In Asia fired 18 of its 60 employees in Singapore; one-third of its smaller employee base in Indonesia and restructured other business units after scrapping the plan to develop its own cryptocurrency. Most of the layoffs were in non-editorial business lines — like the company’s jobs division, which works with companies to pitch the Tech In Asia website as a recruitment platform. That division laid off half of its team, according to a source, while a number of reporters elected to leave the company too, as E27 reported in August.

Tech In Asia founder and CEO Willis Wee did not respond to multiple requests for comment.

While the fundraising target for the ICO wasn’t disclosed, the plan was to bring in enough new investment to extend the company’s eroding runway.

The ICO was part of ‘Project Tribe,’ a strategy to develop a decentralized platform that would allow any organization to develop online communities using a blockchain-based framework built by Tech In Asia, according to documents viewed by TechCrunch.

“Our goal is to give Tech In Asia back into the hands of the community and harness community forces to bring us closer to our mission of building and serving Asia’s tech communities,” the company wrote in one section of the whitepaper, which was never released but had been widely-circulated beyond Tech In Asia staff.

The most successful ICOs have developed decentralized systems that are often initially beneficial to the company behind the token sale, but that can, in theory, be extended to cover other businesses.

Project Tribe used that angle. Bearing some basic similarities to the Civil journalism platform, the plan was initially to host Tech In Asia’s news and community website over the next three years, before opening up to third parties by 2021.

Company-wide Slack messages seen by TechCrunch show that it was discarded after the management team balked at the risk behind the move. They told staff their concern that token economics, pleasing retail investors and legal uncertainties would all distract from the core business. That reversal was taken despite “significant” investment resources and dozens of staff being allocated to develop the concept and whitepaper over a number of months.

From funding to cutbacks

It wasn’t so long ago that Tech In Asia was the toast of Asia’s media community.

The startup — which launched in 2010 — brought in $6.6 million in fresh funding last November in a round led by Korean investor Hanwha.

In the ensuing six months, after watching annual revenue drop thanks in part to a dramatic decline in its events business, the Tech In Asia leadership caught crypto fever and decided to venture into the new world of ICOs.

There were signs of trouble earlier in 2017 for the company. Tech in Asia laid off most of its India-based team in early 2017 and ended its events business in that country. Those decisions impacted its event business, which a source said saw total revenue drop by more than 50 percent.

A shift to community content, with fewer ‘original’ reporting and journalism pieces also cut into company performance. Internal data seen by TechCrunch shows that monthly active users on the site were down 31 percent year-on-year in Q2 2018 — reaching 1.84 million — while total pageviews slipped by one-third, too.

Tech In Asia’s management team told all staff in June that its runway, which was thought to be shored up by the November deal, had gone from a solid-looking 81 months to just 14 months. Management claimed that a change in financial calculations caused the difference and employees were reassured that their jobs were safe.

One month later, however, the company began shedding staff in an effort to cut costs, reversing a hiring spree it launched in January, according to sources.

Two sources told TechCrunch that morale of the remaining staff was crushed when members of the management ‘flaunted’ the fruits of their wealth on social media just days after firing large portions of the team. Some social media updates posted to the internet that upset departing staff members included a photo of Rolex, the view of a villa on a weekend trip to Bali, and an expensive sushi dinner bill.

With the company facing a straitened financial situation, if Tech In Asia tries to raise money again it’ll have some explaining to do to potential investors.

Nonetheless, Wee — the Tech In Asia CEO — is hopeful that the subscription model pivot can make Tech In Asia sustainable in the long run.

“As you probably know, our business model has been built around events and advertising. While these have kept our business going, we are still working towards becoming profitable. Why is achieving this important? Because the only way we can be better at serving Asia’s tech ecosystem is if we have more resources and a consistent income stream,” he wrote when announcing the subscription package.

Full disclosure: I bought an annual subscription to Tech In Asia at the early bird discount rate being offered right now. That doesn’t impact my coverage of this story — I support a number of media businesses via subscription packages.