Boris Johnson, who has pledged to deliver Brexit on Oct. 31, surged closer to power on Thursday when he won by far the most support from Conservative Party lawmakers in the first round of the contest to replace Prime Minister Theresa May.

IBM announced its latest blockchain initiative today. This one is in partnership with KPMG, Merk and Walmart to build a drug supply chain blockchain pilot.

These four companies are coming to together to help come up with a solution to track certain drugs as they move through a supply chain. IBM is acting as the technology partner, KPMG brings a deep understanding of the compliance issues, Merk is of course a drug company and Walmart would be a drug distributor through its pharmacies and care clinics.

The idea is to give each drug package a unique identifier that you can track through the supply chain from manufacturer to pharmacy to consumer. Seems simple enough, but the fact is that companies are loathe to share any data with one another. The blockchain would provide an irrefutable record of each transaction as the drug moved along the supply chain, giving authorities and participants an easy audit trail.

The pilot is part of set of programs being conducted by various stakeholders at the request of the FDA. The end goal is to find solutions to help comply with the U.S. Drug Supply Chain Security Act. According to the FDA Pilot Program website, “FDA’s DSCSA Pilot Project Program is intended to assist drug supply chain stakeholders, including FDA, in developing the electronic, interoperable system that will identify and trace certain prescription drugs as they are distributed within the United States.”

IBM hopes that this blockchain pilot will show it can build a blockchain platform or network on top of which other companies can build applications. “The network in this case, would have the ability to exchange information about these pharmaceutical shipments in a way that ensures privacy, but that is validated,” Mark Treshock, global blockchain solutions leader for healthcare and life sciences at IBM told TechCrunch.

He believes that this would help bring companies on board that might be concerned about the privacy of their information in a public system like this, something that drug companies in particular worry about. Trying to build an interoperable system is a challenge, but Treshock sees the blockchain as a tidy solution for this issue.

Some people have said that blockchain is a solution looking for a problem, but IBM has been looking at it more practically with several real-world projects in production including one to track leafy greens from field to store with Walmart and a shipping supply chain with Maersk to track shipping containers as they move through the world

Treshock believes the Walmart food blockchain is particularly applicable here and could be used as a template of sorts to build the drug supply blockchain. “It’s very similar, tracking food to tracking drugs, and we are leveraging or adopting the assets that we built for food trust to this problem. We’re taking that platform and adapting it to track pharmaceuticals,” he explained.

Walmart is betting on the blockchain to improve food safety

Iran’s supreme leader told Shinzo Abe on Thursday there was no point even replying to a message the Japanese prime minister had brought to Tehran from Donald Trump, as a peacemaking visit was overshadowed by attacks on tankers in the Gulf of Oman.

Two oil tankers were attacked in the Gulf of Oman on Thursday, leaving one ablaze and both adrift, shipping firms said, driving oil prices as much as 4% higher over worries about Middle East supplies. 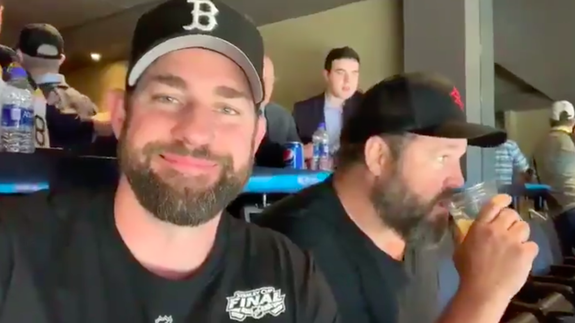 Game 7 of the Stanley Cup final is upon us and for the first year ever there might be more drama off the ice than on it thanks to the cast of *checks notes* off-air NBC comedy The Office.

Ever since stars John Krasinski and Jenna Fischer learned their favorite hockey teams — the Boston Bruins and the St. Louis Blues — would be battling for the cup there’s been trouble in paradise for Jim and Pam. Even Steve Carell picked a side.

A former Stanford University sailing coach avoided prison on Wednesday in the first sentencing to result from the U.S. college admissions scandal after admitting he took bribes to help children of wealthy parents gain admission to the school.

The Massachusetts Institute of Technology and at least one other university have research partnerships with a Chinese artificial intelligence company that has business ties with police in China’s Xinjiang region, where a sweeping crackdown on Uighurs has drawn international condemnation.

Microsoft’s Sunday E3 pressure was all about the games. In fact, while the company did offer some information about hardware and services, the information all arrived fast and furious at the end of the conference. While it’s probably unsurprising that the company had very little to offer in the way of information about its upcoming 8K console, Project Scarlett, most of us expected Project xCloud to get a lot more face time on stage.

The company powered through a whole lot of information about its upcoming streaming offering like it was going out of style (or, perhaps, like the lights were going out at its own theater). The speed and brevity of it all left a number of audience members confused on the specifics — and caused some to speculate that the service night not be as far along as Microsoft had hoped.

How gaming on Microsoft xCloud compares to Google Stadia

We caught up with a few Microsoft reps on our final day at the show to answer some questions. The company is unsurprisingly still mum on a number of key details around the offering. A couple of key things are worth clarifying, though. For starters console stream is not considered a part of Project xCloud. Rather, the ability to play games on one’s own Xbox One remotely is a separate feature that will be coming to users via a software update.

Asked what advantages console streaming has over the parallel xCloud offering, Microsoft’s answer was simple: it’s free. Fair enough. This serves a two-fold purpose. First, it helps differentiate Microsoft’s streaming offerings from Stadia and second, it provides another value proposition for the console itself. As to how performance is expected to differ between console streaming and XCloud, it wouldn’t comment.

As I wrote earlier today, the company does see the potential of a large scale move to the cloud, but anticipates that such a shift is a long ways off. After all, if it didn’t, it likely wouldn’t have announced a new console this week at E3.