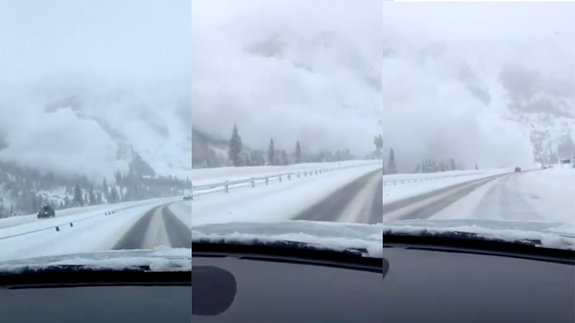 Drivers going down a Colorado highway had quite the close call, after an avalanche ripped down the side of a mountain in front of them.

There were several videos of the incident posted online, capturing the snow piling down toward the road.

Caught on camera: @KDVR viewer captured this video of an #avalanche near I-70 today in Ten Mile Canyon between Frisco and Copper Mountain. #CoWX #KDVR pic.twitter.com/eL6uIwB4c3

An avalanche, likely triggered by an earthquake, has buried a hotel in the Italian region of Abruzzo, leaving at least 30 people missing.

A series of earthquakes hit the region Wednesday, including one with a 5.7 magnitude.

Local residents alerted emergency services after the hotel’s roof partly collapsed. But rescue efforts were hindered by a snowstorm which blocked access to the hotel.

Pictures showed rescuers shovelling their way through a wall of snow, and at least one man being led through the cleared path. Read more…

A firehose of moisture and a series of potent storms have sent the western United States see-sawing from drought to flood in the past few weeks, with widespread extreme weather continuing on Wednesday.

Weather warnings and advisories, from blizzard warnings to flood watches and warnings were in effect for nine states across the West as of Wednesday morning.

SEE ALSO: 2-week blitz of storms to bring damaging flooding, 12-plus feet of snow to California

Heavy snow with accumulations greater than 100 inches at the highest peaks of the the Sierra Nevada Mountains are possible through Thursday, with winds of greater than 65 miles per hour likely. The National Weather Service (NWS) has issued a blizzard warning for the Lake Tahoe area, its first for the region in nine years.  Read more…