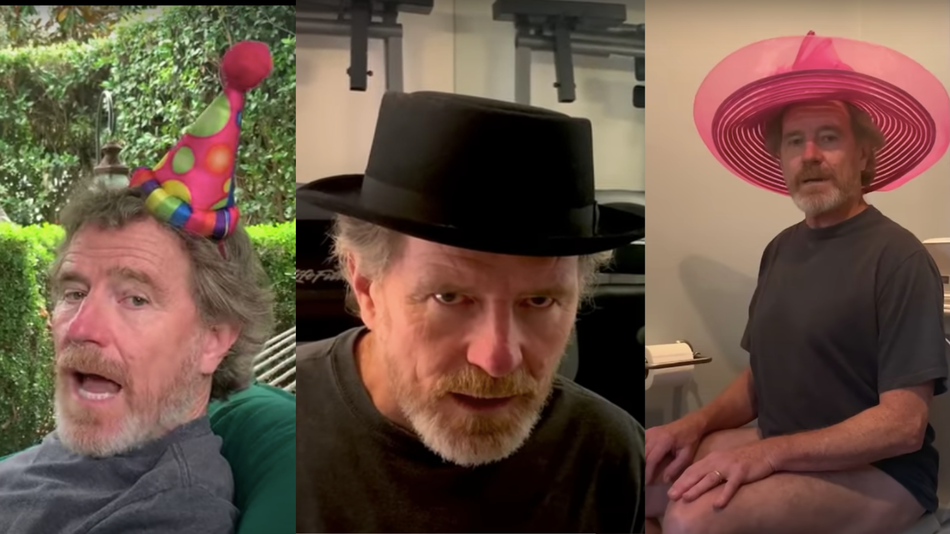 Bryan Cranston. Is a man. Of many hats.

Sure, we all know the Heisenberg pork pie chapeau (and it makes an appearance here). But before this mildly unhinged Fallon segment who knew Cranston could rock a sailor’s cap, a little red bonnet, or a sweeping fuchsia fascinator while on the toilet with such dead-eyed, menacing panache? Truly, he has the range, and I am just crazed enough after months in my house that it feels like the funniest thing I’ve seen all week.

I desperately want to have been in the Zoom pitch meeting where some exhausted writer went “He wore that hat in Breaking Bad, right? Can we write a weird banger and just stick him and Jimmy in a bunch of random crap from the hat closet then cut it together like a TikTok ripoff?” Read more…

We all have secret selves, but you’ve just gotta let ’em shine. We’ve all got actual secrets too, but maybe some of those can stay well and truly buried.

That’s what we’ve learned from a weird song performed by Jimmy Fallon alongside Breaking Bad‘s Bryan Cranston and To All the Boys I’ve Loved Before star (and heroine of our hearts) Lana Condor.

The unlikely trio time-travelled back to the ol’ high school cafeteria on The Tonight Show for a song dubbed “To All the Me’s I’ve Loved Before,” reminiscent of High School Musical‘s “Stick to the Status Quo.”

More about Bryan Cranston, Jimmy Fallon, The Tonight Show, Lana Condor, and To All The Boys I Ve Loved Before

Growing up, Bryan Cranston’s family called him a “Sneaky Pete.”

The Breaking Bad actor, who had a challenging childhood, used to try and find shortcuts to chores and conducted mini-scams like reselling used sun tan lotion.

That nickname was the jumping point for Cranston’s new show of the same name, Sneaky Pete. The Amazon series, which originally was for CBS, was co-created by Cranston and House‘s David Shore. The show, which debuted Friday, follows a recently released con man Marius (played by Giovanni Ribisi), who assumes the identity of his cellmate Pete in order to escape urban kingpin Vince (played by Cranston) who he owes $100,000 to. Read more…