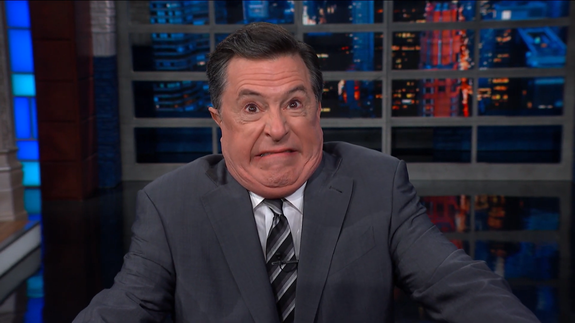 But there was one moment that the late show host had to talk about again: Trump’s admonishing of the people investigating him during his speech on Saturday.

And by talk, we mean totally mock the president with a new, weird impression that’s better if you just watch it (at 2:40). Colbert also tore into Trump’s press conference on Tuesday, where he answered questions about the investigations.

“It’s just so sad when his heart’s not in it, you know,” Colbert quipped. “He’s like an aging singer doing his 16th show of the week in Branson to a half-empty room.” Read more…

After his awkward endorsement of pedophilia disqualified Milo Yiannopoulos to be the hard right’s token gay pal, CPAC needed a new speaker to fill his slot their conference, and the guy they chose was Jikido ‘Jay’ Aeba, a member of the notorious Japanese “Happy Science” cult, who helped the religion extrude a tendril into the political realm by founding the Happiness Realization Party.
(more…)

In a delightful moment broadcast from a Feb. 23 CPAC event, Bannon reached out for a brief moment of human connection only to have his advances sort of… swatted away? By Chief of Staff Priebus.

SEE ALSO: Sorry, Steve Bannon, Jake Tapper isn’t going to “shut up” because you told him to

It’s five seconds long, but people are already latching on to this little incident.

Although new fan fiction is probably already in the works, for politics-slash-romance fans. Read more… Why exactly is Facebook helping to fund CPAC, to the tune of about $120,000 in cash and in-kind contributions?