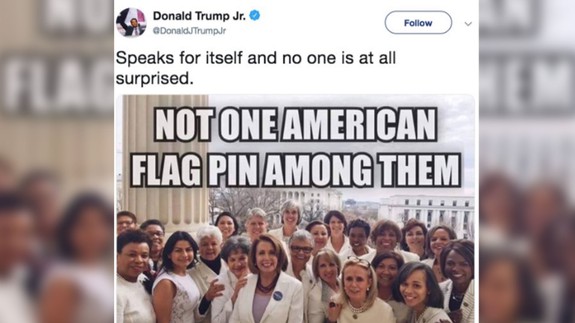 Donald Trump Jr. might want to hold off sharing Twitter memes for a bit while he recovers from the internet dragging him.

Following the State of the Union, the president’s son decided to tweet a meme about the Democratic women of Congress on Wednesday, who wore suffragette white to the address to make a powerful visual statement.

Trump Jr. tweeted the meme — a photo of the women with the words “NOT ONE AMERICAN FLAG AMONG THEM” across it — to his 3.3 million followers on Wednesday, adding, “Speaks for itself and no one is at all surprised.”

Speaks for itself and no one is at all surprisedpic.twitter.com/kLoJzMmY10