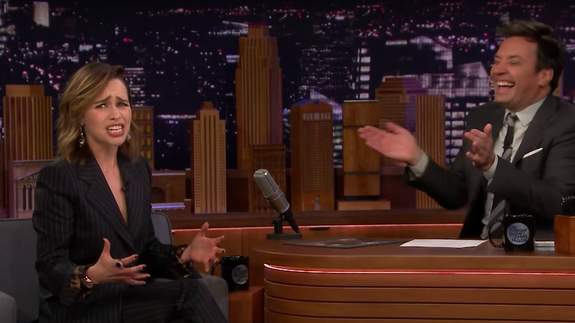 Game of Thrones may have ended, but the rivalry between Daenerys Targaryen and Sansa Stark lives on.

On Wednesday’s episode of The Tonight Show, dragon queen Emilia Clarke addressed Sophie Turner’s implication that she was behind the infamous coffee cup that appeared in Game of Thrones‘ final season.

The Queen of the North had pointed the finger at Clarke when she spoke to Fallon back in May. However Clarke has claimed innocence, and is now accusing Conleth Hill, who played Varys, of being the true culprit – an accusation backed by some pretty compelling evidence.

“It was Conleth’s coffee cup! He said so!” Clarke exclaimed to Fallon. “He’s like, ‘I think it was, I’m sorry darling, I didn’t want to say anything ’cause it seemed, you know, the heat was very much on you,’ and I was like, ‘WHAT!?'” Read more… 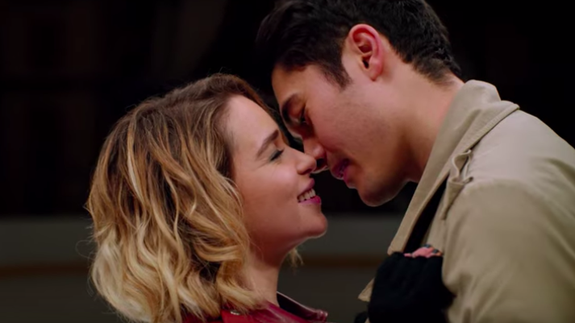 There is A Lot going on in the trailer for Last Christmas.

Counting off the tropes, we have a clumsy (but beautiful!) heroine whose life is a mess (she works as an elf in a Christmas shop and she’s not even good at it!); a meet-cute involving bird poop; our lead couple literally bumping into one another; a grim hospital backstory; a scene where Golding surprises Clarke with an ice-rink-all-to-themselves date (complete with booming lights-on noise); and at least one public carol-singing scene. Oh, and it’s “featuring the songs of George Michael.” Read more…

No other TV show (and few films) can beat the spectacular special effects in Game of Thrones, and a new behind-the-scenes video shows us exactly what goes into bringing Westeros to life.

Sneakily, there’s some Season 6 footage spliced in with the Season 7 shots, which makes it hard to tell which visual effects are old and which are new — but the video does feature Daenerys Targaryen riding one of her dragons into battle against a greenscreen backdrop, and judging by her costume, this is part of her battle against the Lannister army, which was previewed in the Season 7 trailer and this photo of a dragon roasting some unwitting Lannister soldiers.   Read more…