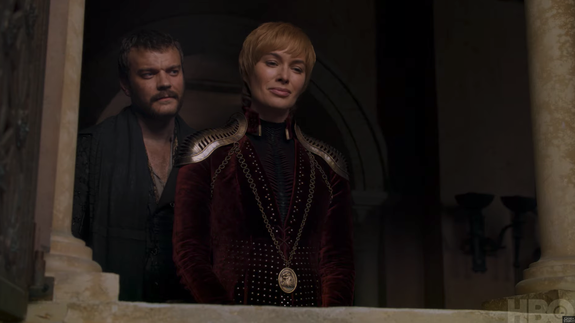 If you can see through your tears, the scenes for next week on Game of Thrones Season 8 Episode 4 is here. And it is all about the bloody aftermath that will seemingly follow the Long Night we just survived.

“We Have won the Great War,”  Daenerys says. “Now we will win the Last War.”

Surprisingly, this strongman tactic appears to work on the ice cold northerns, who seem to finally be warming up to their new dragon king. Read more…

Year after year, nearly every Game of Thrones season is defined by one major, sprawling battle sequence. And from the sounds of new reports, Season 8 will deliver a battle to end all battles.

And we are straight shook by what it could mean.

Watchers on the Wall reported on the now-deleted Instagram post from a Game of Thrones assistant director, Jonathan Quinlan. The post featured a letter from “The Producer Types” on the show, thanking “the Night Dragons” (aka the cast and crew) for shooting in “the cold, the snow, the rain, the mud, the sheep shit of Toome and the winds of Magheramorne” for 55 consecutive nights. Read more…

Davos Seaworth has basically been the lone voice of reason on Game of Thrones since his introduction in Season 2, graduating from advising the terminally stubborn Stannis Baratheon to advising the suicidally stubborn Jon Snow (aka Aegon Targaryen).

Both of those roles were pretty thankless, and now that Jon has decided to unite — politically and, um, physically — with Daenerys Targaryen (aka Jon’s aunt), life’s about to get a lot more difficult for everyone on Team Snowgaryen heading into the final season.

Mashable spoke to Ser Davos himself, Liam Cunningham, in the wake of the Game of Thrones Season 7 finale, to discuss his thoughts on Westeros’ newest incestuous power couple, who will survive Season 8, and whether we’ll finally get to see Cleganebowl.  Read more…