At its core, SessionM aggregates loyalty data for brands to help them understand their customer better, says company co-founder and CEO Lars Albright. “We are a customer data and engagement platform that helps companies build more loyal and profitable relationships with their consumers,” he explained.

Essentially that means, they are pulling data from a variety of sources and helping brands offer customers more targeted incentives, offers and product recommendations “We give [our users] a holistic view of that customer and what motivates them,” he said. 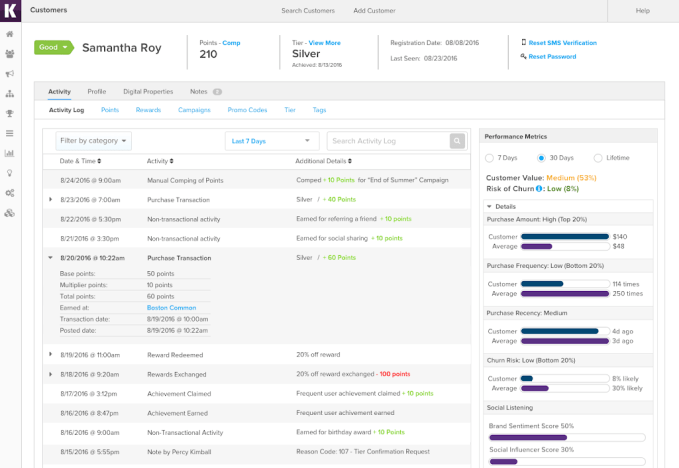 To achieve this, SessionM takes advantage of machine learning to analyze the data stream and integrates with partner platforms like Salesforce, Adobe and others. This certainly fits in with Adobe’s goal to build a customer service experience system of record and Salesforce’s acquisition of Mulesoft in March to integrate data from across an organization, all in the interest of better understanding the customer.

When it comes to using data like this, especially with the advent of GDPR in the EU in May, Albright recognizes that companies need to be more careful with data, and that it has really enhanced the sensitivity around stewardship for all data-driven businesses like his.

“We’ve been at the forefront of adopting the right product requirements and features that allow our clients and businesses to give their consumers the necessary control to be sure we’re complying with all the GDPR regulations,” he explained.

The company was not discussing valuation or revenue. Their most recent round prior to today’s announcement, was a Series D in 2016 for $35 million also led by Salesforce Ventures.

SessionM, which was founded in 2011, has around 200 employees with headquarters in downtown Boston. Customers include Coca-Cola, L’Oreal and Barney’s.

“This is going to be a never-ending battle” said Mark Zuckerberg . He just gave the most candid look yet into his thoughts about Cambridge Analytica, data privacy, and Facebook’s sweeping developer platform changes today during a conference call with reporters. Sounding alternately vulnerable about his past negligence and confident about Facebook’s strategy going forward, Zuckerberg took nearly an hour of tough questions.

You can read a transcript here and listen to a recording of the call below:

The CEO started the call by giving his condolences to those affected by the shooting at YouTube yesterday. He then delivered this mea culpa on privacy:

We’re an idealistic and optimistic company . . . but it’s clear now that we didn’t do enough. We didn’t focus enough on preventing abuse and thinking through how people could use these tools to do harm as well . . . We didn’t take a broad enough view of what our responsibility is and that was a huge mistake. That was my mistake.

This is Zuckerberg’s strongest statement yet about his and Facebook’s failure to anticipate worst-case scenarios, which has led to a string of scandals that are now decimating the company’s morale. Spelling out how policy means nothing without enforcement, and pairing that with a massive reduction in how much data app developers can request from users makes it seem like Facebook is ready to turn over a new leaf.

Here are the highlights from the rest of the call:

On Zuckerberg calling fake news’ influence “crazy”: “I clearly made a mistake by just dismissing fake news as crazy — as having an impact . . . it was too flippant. I never should have referred to it as crazy.

On deleting Russian trolls: Not only did Facebook delete 135 Facebook and Instagram accounts belonging to Russian government-connected election interference troll farm the Internet Research Agency, as Facebook announced yesterday. Zuckerberg said Facebook removed “a Russian news organization that we determined was controlled and operated by the IRA”.

On the 87 million number: Regarding today’s disclosure that up to 87 million people had their data improperly access by Cambridge Analytica, “it very well could be less but we wanted to put out the maximum that we felt it could be as soon as we had that analysis.” Zuckerberg also referred to The New York Times’ report, noting that “We never put out the 50 million number, that was other parties.”

On users having their public info scraped: Facebook announced this morning that “we believe most people on Facebook could have had their public profile scraped” via its search by phone number or email address feature and account recovery system. Scammers abused these to punch in one piece of info and then pair it to someone’s name and photo . Zuckerberg said search features are useful in languages where it’s hard to type or a lot of people have the same names. But “the methods of react limiting this weren’t able to prevent malicious actors who cycled through hundreds of thousands of IP addresses and did a relatively small number of queries for each one, so given that and what we know to day it just makes sense to shut that down.”

On when Facebook learned about the scraping and why it didn’t inform the public sooner: This was my question, and Zuckerberg dodged, merely saying “We looked into this and understood it more over the last few days as part of the audit of our overall system”, while declining to specify when Facebook first identified the issue.

On implementing GDPR worldwide: Zuckerberg refuted a Reuters story from yesterday saying that Facebook wouldn’t bring GDPR privacy protections to the U.S. and elsewhere. Instead he says, “we’re going to make all the same controls and settings available everywhere, not just in Europe.”

On if board has discussed him stepping down as chairman: “Not that I’m aware of” Zuckerberg said happily.

On if he still thinks he’s the best person to run Facebook: “Yes. Life is about learning from the mistakes and figuring out what you need to do to move forward . . . I think what people should evaluate us on is learning from our mistakes . . .and if we’re building things people like and that make their lives better . . . there are billions of people who love the products we’re building.”

On the Boz memo and prioritizing business over safety: “The things that makes our product challenging to manage and operate are not the tradeoffs between people and the business. I actually think those are quite easy because over the long-term, the business will be better if you serve people. I think it would be near-sighted to focus on short-term revenue over people, and I don’t think we’re that short-sighted. All the hard decisions we have to make are tradeoffs between people. Different people who use Facebook have different needs. Some people want to share political speech that they think is valid, and other people feel like it’s hate speech . . . we don’t always get them right.”

The real threat to Facebook is the Kool-Aid turning sour

On whether Facebook can audit all app developers: “We’re not going to be able to go out and necessarily find every bad use of data” Zuckerberg said, but confidently said “I actually do think we’re going to be be able to cover a large amount of that activity.

On whether Facebook will sue Cambridge Analytica: “We have stood down temporarily to let the [UK government] do their investigation and their audit. Once that’s done we’ll resume ours … and ultimately to make sure none of the data persists or is being used improperly. And at that point if it makes sense we will take legal action if we need to do that to get people’s information.”

On how Facebook will measure its impact on fixing privacy: Zuckerberg wants to be able to measure “the prevalence of different categories of bad content like fake news, hate speech, bullying, terrorism. . . That’s going to end up being the way we should be held accountable and measured by the public . . .  My hope is that over time the playbook and scorecard we put out will also be followed by other internet platforms so that way there can be a standard measure across the industry.”

On whether Facebook should try to earn less money by using less data for targeting “People tell us if they’re going to see ads they want the ads to be good . . . that the ads are actually relevant to what they care about . . On the one hand people want relevant experiences, and on the other hand I do think there’s some discomfort with how data is used in systems like ads. But I think the feedback is overwhelmingly on the side of wanting a better experience. Maybe it’s 95-5.”

On whether #DeleteFacebook has had an impact on usage or ad revenue: “I don’t think there’s been any meaningful impact that we’ve observed…but it’s not good.”

On the timeline for fixing data privacy: “This is going to be a never-ending battle. You never fully solve security. It’s an arms race” Zuckerberg said early in the call. Then to close Q&A, he said “I think this is a multi-year effort. My hope is that by the end of this year we’ll have turned the corner on a lot of these issues and that people will see that things are getting a lot better.”

Overall, this was the moment of humility, candor, and contrition Facebook desperately needed. Users, developers, regulators, and the company’s own employees have felt in the dark this last month, but Zuckerberg did his best to lay out a clear path forward for Facebook. His willingness to endure this question was admirable, even if he deserved the grilling.

The company’s problems won’t disappear, and its past transgressions can’t be apologized away. But Facebook and its leader have finally matured past the incredulous dismissals and paralysis that characterized its response to past scandals. It’s ready to get to work.

Another legal tech startup coming out of the UK: Cognitiv+ is applying artificial intelligence to automate contract analysis and management, offering businesses a way to automate staying on top of legal risks, obligations and changing regulatory landscapes. Read More