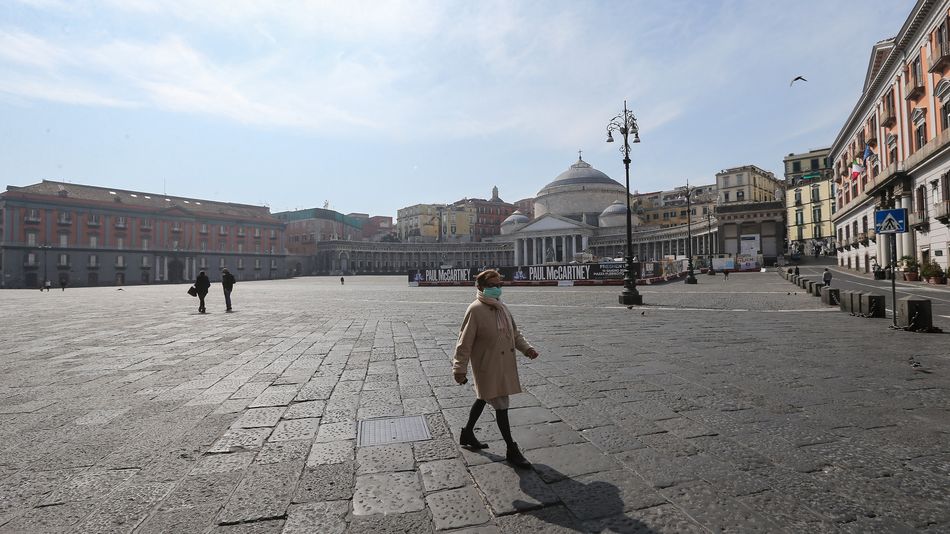 To halt the spread of the novel coronavirus, some cities countries are taking a drastic measure: Stopping the population from entering or leaving certain areas, otherwise known as lockdown.

Italy was the first in Europe (now the pandemic’s epicenter, according to the WHO) to institute the policy, but a whole slew of countries followed suit over the weekend.

Here’s a list of places around the world that have come under lockdown, or partial lockdown measures, so far:

Italians in lockdown all over Italy are keeping each other company by singing, dancing and playing music from the balconies. A thread to celebrate the resilience of ordinary people. This is Salerno: pic.twitter.com/3aOchqdEpn

Imagine a moving tower made of huge cement bricks weighing 35 metric tons. The movement of these massive blocks is powered by wind or solar power plants and is a way to store the energy those plants generate. Software controls the movement of the blocks automatically, responding to changes in power availability across an electric grid to charge and discharge the power that’s being generated.

The development of this technology is the culmination of years of work at Idealab, the Pasadena, Calif.-based startup incubator, and Energy Vault, the company it spun out to commercialize the technology, has just raised $110 million from SoftBank Vision Fund to take its next steps in the world.

Energy storage remains one of the largest obstacles to the large-scale rollout of renewable energy technologies on utility grids, but utilities, development agencies and private companies are investing billions to bring new energy storage capabilities to market as the technology to store energy improves.

The investment in Energy Vault is just one indicator of the massive market that investors see coming as power companies spend billions on renewables and storage. As The Wall Street Journal reported over the weekend, ScottishPower, the U.K.-based utility, is committing to spending $7.2 billion on renewable energy, grid upgrades and storage technologies between 2018 and 2022.

Meanwhile, out in the wilds of Utah, the American subsidiary of Japan’s Mitsubishi Hitachi Power Systems is working on a joint venture that would create the world’s largest clean energy storage facility. That 1 gigawatt storage would go a long way toward providing renewable power to the Western U.S. power grid and is going to be based on compressed air energy storage, large flow batteries, solid oxide fuel cells and renewable hydrogen storage.

“For 20 years, we’ve been reducing carbon emissions of the U.S. power grid using natural gas in combination with renewable power to replace retiring coal-fired power generation. In California and other states in the western United States, which will soon have retired all of their coal-fired power generation, we need the next step in decarbonization. Mixing natural gas and storage, and eventually using 100% renewable storage, is that next step,” said Paul Browning, president and CEO of MHPS Americas.

Energy Vault’s technology could also be used in these kinds of remote locations, according to chief executive Robert Piconi.

Energy Vault’s storage technology certainly isn’t going to be ubiquitous in highly populated areas, but the company’s towers of blocks can work well in remote locations and have a lower cost than chemical storage options, Piconi said.

“What you’re seeing there on some of the battery side is the need in the market for a mobile solution that isn’t tied to topography,” Piconi said. “We obviously aren’t putting these systems in urban areas or the middle of cities.”

For areas that need larger-scale storage that’s a bit more flexible there are storage solutions like Tesla’s new Megapack.

The Megapack comes fully assembled — including battery modules, bi-directional inverters, a thermal management system, an AC breaker and controls — and can store up to 3 megawatt-hours of energy with a 1.5 megawatt inverter capacity.

The Energy Vault storage system is made for much, much larger storage capacity. Each tower can store between 20 and 80 megawatt hours at a cost of 6 cents per kilowatt hour (on a levelized cost basis), according to Piconi.

The first facility that Energy Vault is developing is a 35 megawatt-hour system in Northern Italy, and there are other undisclosed contracts with an undisclosed number of customers on four continents, according to the company.

One place where Piconi sees particular applicability for Energy Vault’s technology is around desalination plants in places like sub-Saharan Africa or desert areas.

Xiaomi’s expansion into Europe continues at speed after the Chinese smartphone maker announced plans to open its first retail store in London.

The company is best known for developing quality Android phones at affordable prices and already it has launched devices in Spain, Italy and France. Now, that foray has touched the UK where Xiaomi launched its Mi 8 Pro device at an event yesterday and revealed that it will open a store at the Westfield mall in London on November 18.

That outlet will become Xiaomi’s first authorized Mi Store. Styled on Apple’s iconic stores, the Mi store will showcase a range of products, not all of which are available in the UK.

Still, Xiaomi has shown a taste of what it plans to offer in the UK by introducing a number of products alongside the Mi 8 Pro this week. Those include its budget tier Redmi 6A phone and, in its accessories range, the Xiaomi Band 3 fitness device and the £399 Mi Electric Scooter. The company said there are more to come.

That product selection will be available via Xiaomi’s own Mi.com store and a range of other outlets, including Amazon, Carphone Warehouse and Three, which will have exclusive distribution of Xiaomi’s smartphones among UK telecom operators.

It’s official, Xiaomi has finally arrived in the UK! We brought our flagship #Mi8Pro which had its global debut outside Greater China. Other products announced include Xiaomi Band 3, our wildly popular fitness band, as well as Mi Electric Scooter. pic.twitter.com/YlOBysFBgM

Xiaomi hasn’t branched out into the U.S. — it does sell a number of accessories — but the European launches mark a new phase of its international expansion to take it beyond Asia. While Xiaomi does claim to be present in “more than 70 countries and regions around the world,” it has recorded most of its success in China, India and pockets of Asia.

CEO Lei Jun has, however, spoken publicly of his goal to sell Xiaomi phones in the U.S by “early 2019” at the latest.

Still, even with its focus somewhat limited, Xiaomi claims it has shipped a record 100 million devices in 2018 to date. The firm also posted a $2.1 billion profit in its first quarter as a public company following its Hong Kong IPO. However, the IPO underwhelmed with Xiaomi going public at $50 billion, half of its reported target, while its shares have been valued at below their IPO price since the middle of September.

Italians, get your stomachs ready.

Filipino fast-food giant Jollibee is making its foray into the European market, with plans to open its first store in Italy.

SEE ALSO: Fast food giant Jollibee is coming to Australia, but what is it?

The company announced its plans, saying Italy’s 200,000 Filipinos — the biggest Filipino expat group in Europe — presented a great first step for the company into the region.

“We’re looking at Italy…we will follow where the Pinoys (slang for Filipinos) are”, said Jose Minana Jr, president of the Jollibee group, in an interview last year.

Jollibee has gained somewhat of a cult following among Filipinos, and is well known for its fried chicken and spaghetti offerings. Read more…

A group of BBC News journalists had to run for their lives when a volcanic eruption took place while they were filming on Mount Etna.

An avalanche, likely triggered by an earthquake, has buried a hotel in the Italian region of Abruzzo, leaving at least 30 people missing.

A series of earthquakes hit the region Wednesday, including one with a 5.7 magnitude.

Local residents alerted emergency services after the hotel’s roof partly collapsed. But rescue efforts were hindered by a snowstorm which blocked access to the hotel.

Pictures showed rescuers shovelling their way through a wall of snow, and at least one man being led through the cleared path. Read more…