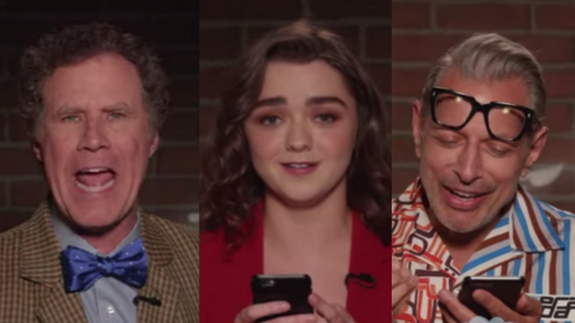 Jimmy Kimmel’s Celebrities Read Mean Tweets is back, and there’s a lot going on here. Zendaya sniffs her shoe (and claps back perfectly to her hater). Mark Hamill busts out his Yoda impression. Kim K says “anus.” Sarah Paulson swears a LOT. Jake Gyllenhaal gets poetic. David Spade is also there (and might have the funniest tweet of the night). Enjoy, and never let the haters get you down. Read more…

Just for laughs, James Corden stuck the entire star-studded cast of Thor in a cardboard budget, school play version of the hit movie.

The Late Late Show host sprung the surprise on a bunch of (very lucky) unsuspecting moviegoers, interrupting the movie minutes into the beginning. Corden then brought out each member of the cast in their movie roles, starting with Chris Hemsworth and Tom Hiddleston, before introducing Cate Blanchett, Jeff Goldblum, and Mark Ruffalo to the stunned audience.

While it’s incredible to see the Hollywood stars in the very budget version of their movie, it’s even more amazing that they didn’t seem to crack up while acting the whole thing out. Read more…