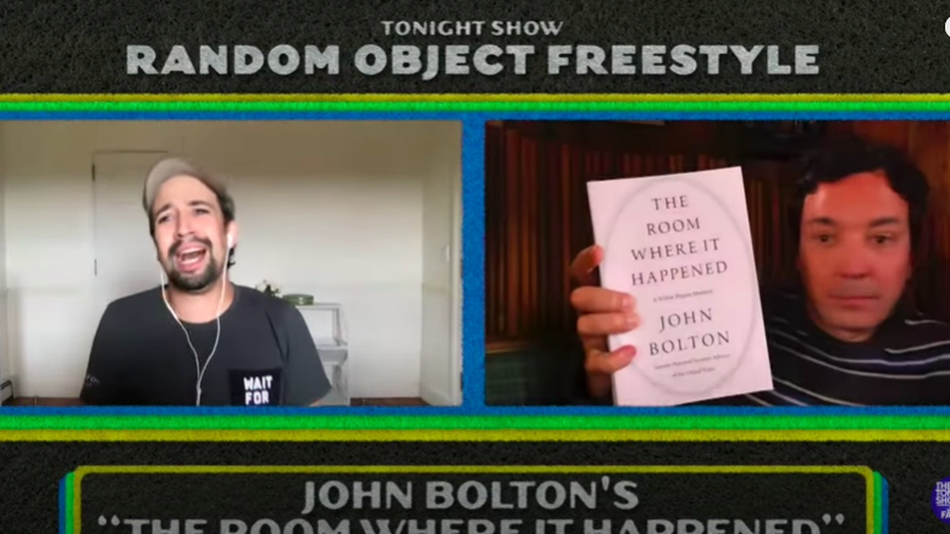 With the filmed original cast performance of Hamilton hitting Disney+ next week, creator and star Lin-Manuel Miranda returned to the Tonight Show for the first time since Jimmy Fallon’s first at-home show in March. Miranda, who also happens to have a documentary about his improv show Freestyle Love Supreme coming out next month, was game for a game called Random Object Freestyle.

Fallon held up a number of not especially random, suspiciously topical objects — including a Hamilton poster, a Broadway street sign, a box of popcorn, and a face mask — for Miranda to riff on lyrically. He didn’t bat an eye until Fallon revealed a copy of former national security advisor John Bolton’s tell-all Trump White House memoir, whose title happens to be a Hamilton reference.  Read more…

Dubbed “The Hamilton Polka,” Yankovic’s new release is a crazy mashup of hits from the Broadway musical, with takes on “My Shot,” “Wait For It,” “The Schuyler Sisters,” and more.

The first taste came in December, with a recording of “Ben Franklin’s Song,” by The Decemberists, and was followed by Nas’ “Wrote My Way Out” featuring Aloe Blacc, Dave East and Miranda himself. Read more…

Hamilton mastermind Lin-Manuel Miranda and Aaron Sorkin, the creator of The West Wing, have a lot in common.

They’re both fiery wordsmiths, well-known for their ability to write spellbinding swathes of dialogue, not to mention their shared fascination with American politics.

Given those similarities, it seemed inevitable that their minds would meet. And now they have (sort of) in the form of a truly impressive West Wing rap produced by the West Wing Weekly podcast and featuring Miranda on the mic.