Fox Sports said Tuesday it will broadcast the rest of the eNASCAR Pro Invitational iRacing Series, following Sunday’s virtual race that was watched by 903,000 viewers, according to Nielsen Media Research.

While those numbers are far below the millions of viewers who watch NASCAR’s official races — the last one at Phoenix Raceway reached 4.6 million — it still hit a number of firsts that Fox Sports found notable enough to commit to broadcasting the virtual racing series for the remainder of the season, beginning March 29.

The races will be simulcast on the FOX broadcast network, Fox Sports iRacing and the FOX Sports app. Races will be available in Canada through FOX Sports Racing.

Virtual racing, which lets competitors race using a system that includes a computer, steering wheel and pedals, has been around for years. But it’s garnered more attention as the spread of COVID-19, the disease caused by coronavirus, has prompted sports organizers to cancel or postpone live events, including the NCAA March Madness basketball tournament, NBA, NHL and MLB seasons as well as Formula 1 and NASCAR racing series.

Classic. @JimmieJohnson checks in live with @JeffGordonWeb during the #ProInvitationalSeries and says he needs to “learn different cars” for his 2021 schedule.

(And Jeff helps him notice a bit of damage

NASCAR ran its first virtual race in the series on Sunday in lieu of its planned race at the Homestead-Miami Speedway, which was canceled due to COVID-19. Not only was it the most watched esports event in U.S. television history, it was Sunday’s most-watched sports telecast on cable television that day.

“This rapid-fire collaboration between FOX Sports, NASCAR and iRacing obviously has resonated with race fans, gamers and television viewers across the country in a very positive way,” Brad Zager, FOX Sports executive producer said in a statement. “We have learned so much in a relatively short period of time, and we are excited to expand coverage of this brand-new NASCAR esports series to an even wider audience.”

Granted, there aren’t any live sports to watch in this COVID-19 era. Still, it bodes well for the future of esports, perhaps even after the COVID-19 pandemic ends.

“The response on social media to last Sunday’s race has been incredible,” said four-time NASCAR Cup Series champion Jeff Gordon, who is announcer for Fox NASCAR. “We were able to broadcast a virtual race that was exciting and entertaining. It brought a little bit of ‘normalcy’ back to the weekend, and I can’t wait to call the action Sunday at Texas.”

You can see what the virtual racing looks like here in this clip from Fox Sports.

NASCAR isn’t the only racing series to turn to esports. Formula 1 announced last week that it would host an esports series, the F1 Esports Virtual Grand Prix series, with a number of current F1 drivers alongside a number of other stars.

The virtual Formula 1 races will use Codemaster’s official Formula 1 2019 PC game and fans can follow along on YouTube, Twitch and Facebook, as well as on F1.com. The races will be about half as long as regular races, with 28 laps. The first race took place March 22. The first-ever virtual round of the Nürburgring Endurance Series kicked off on March 21.

The Los Angeles startup community is joining the rest of the world in mourning the death of NBA superstar, entrepreneur and investor Kobe Bryant who was killed in a helicopter crash in Calabasas, Calif., shortly before 10 a.m. on Sunday.

Reports indicate that Bryant, his 13-year-old daughter Gianna Maria-Onore Bryant, and seven other passengers were on board a helicopter traveling to Bryant’s basketball training facility Mamba Academy. There were no survivors.

The 41 year-old NBA All-Star, Olympic medalist, Oscar winner and father of four was most famous for his achievements on the basketball court, but had established himself as an entrepreneur and investor whose reach extended far beyond the Los Angeles area that he called home.

“Kobe was loved in Los Angeles,” wrote Mark Suster, managing partner of the Los Angeles-based venture capital firm Upfront Ventures, in a private message to TechCrunch. “He not only played at the peak of his sport but everything he did was quality from film, to books to philanthropy. It’s truly a sad day in LA.”

Bryant launched his venture career with partner and serial entrepreneur Jeff Stibel back in 2013, according to Crunchbase. The pair made a mix of early- and late-stage investments in Los Angeles-based companies like LegalZoom, Scopely, Art of Sport, The Honest Company, RingDNA, FocusMotion, DyshApp and Represent.

Last year, the investment firm expanded with a $1.7 billion investment vehicle that was launched in partnership with the private equity fund, Permira, according to a report in USA Today.

“We are mourning this terrible loss and still searching for the words,” wrote Mattias Metternich, co-founder of Bryant’s grooming startup, Art of Sport, in an email. “As a founding partner to [Art of Sport] he was woven into the very fabric of our company and its vision and DNA. As a mentor we drew on his wisdom, passion and drive everyday… In the short term our thoughts and hearts are with him, Gianna and his surviving family.”

An all-time legend, and our friend and supporter. Our thoughts are with all of the families affected by the tragic accident today. You will be missed, @kobebryant. pic.twitter.com/FzhNl5ndau

During his time with the Los Angeles Lakers, the MVP and 18-time All-Star set records and helped architect runs to five national championships. Together with Shaquille O’Neal, Bryant helped make the Lakers the dominant team in the NBA in the early 2000s.

“Kobe was the rare combination of God-given talent on-and-off the court with a competitive athlete mindset that was unrivaled to the point it was called the ‘mamba mentality’. Whatever he put his focus turned into excellence, whether it was an NBA championship, an Oscar, entering the VC game or — most importantly — fatherhood,” wrote Upfront Ventures general partner Kobie Fuller. “This loss is shocking and puts into perspective how precious our moments on this earth really are. My heart goes out to the Bryant family during this incredibly difficult time.”

While Bryant’s sports career was storied, and his post-sports career in media and investing successful, his legacy is complicated by a sexual assault allegation in 2003, which was later settled and for which Bryant apologized, but did not admit guilt. 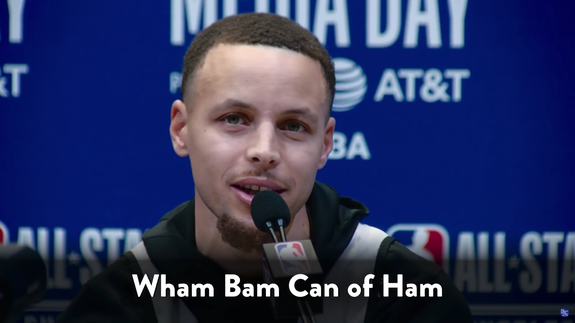 Did Steph Curry’s interviews over the 2019 NBA All-Star weekend seem full of weird turns of phrase to you? It’s all Jimmy Fallon’s fault.

For a segment subbed “Drop It In,” The Tonight Show host had the basketball star slip strange words into his post-game chats, and Curry managed to weave them all in multiple times without breaking a sweat.

The phrases you’re looking for are “Energizer bunny,” “flipping pancakes” and “wham, bam, can of ham,” the latter of which we intend to weave into all conversations from now on. Read more…

Alright, where do you even start with a performance like this.

Pop star and Black Eyed Peas singer Fergie opened the NBA All-Star game with her rendition of the national anthem, and by goodness, it was an interesting rendition to say the least.

While other singers may have opted for a straight-up, no fuss performance; Fergie gave the anthem a jazzy twist, which is incredible in both its braveness and repugnance for the ear.

Throughout the performance, Fergie wildly shifts between different keys for some reason.  Read more…

Now that the Olympics has added three-on-three basketball as a medal-worthy competition, the usually street ball/playground-based game is big time, and Ice Cube is about to cash in on it.

Actually, the rapper/actor announced his Big 3 league long before the Olympics added the sport to the 2020 games (in January), but his timing for the official launch is perfect.

Mark it down in your calendars 📅 for the next 10 weeks. BIG3 and @FS1 are bringing ball back. Don’t miss out the debut of #BIG3 on @FS1 this MONDAY NIGHT, 8p ET.

NBA stars: They grow up so fast, you know?

One season, your favorite player is a young rookie full of promise. Then, what feels like a few months later, your guy is a grown-ass man with a bushy beard and the sneaky veteran’s bag of tricks to match.

That’s why these 10 GIFs are so completely mesmerizing — they cram years of growth and evolution into just a couple seconds.

A few months back, we showed you an eye-popping GIF that illustrates LeBron James’ progression from teenage rookie to NBA demigod. Now the folks behind that animation, SportsBettingExperts.com, are back with more. Bless them for it.  Read more…

The Golden State Warriors are good at many things — like winning lots of basketball games and selling jerseys. Photoshoots, however, is not one of them.

It’s the NBA‘s All-Star Weekend, which annually warrants a bizarre, pseudo-magazine spread to celebrate the NBA all-stars. Just as the internet chuckled at the Warriors’ photos last April, the trusty ol’ Twittersphere is picking on these guys once again.

The NBA takes player portraits every year during All-Star Weekend, and — to be fair — the Warriors aren’t the only ones with outrageous photos (see: DeAndre Jordan’s incredible cloak situation). But the Warriors are the NBA’s best team, making them a perennial target. And after last year’s corny photoshoot led to plenty of trolling, folks apparently couldn’t resist this time around.  Read more…

Some good-natured trash talk or a general airing of grievances is far from unheard of among pro athletes on social media, but this little beef between two NBA stars got real personal real fast.

It all starts with some-good natured ribbing during Friday night’s game between the Portland Trail Blazers and Memphis Grizzlies. The Blazers’ official account tweeted out a GIF making fun of Grizzlies forward Chandler Parsons for air-balling a three-pointer.

To be fair, the NBA 3-point line is really, really far away from the basketpic.twitter.com/dHusI9cHcW

Some good-natured trash talk or a general airing of grievances is far from unheard of among pro athletes on social media, but this little beef between two NBA stars got real personal real fast.

It all starts with some-good natured ribbing during Friday night’s game between the Portland Trail Blazers and Memphis Grizzlies. The Blazers’ official account tweeted out a GIF making fun of Grizzlies forward Chandler Parsons for air-balling a three-pointer.

To be fair, the NBA 3-point line is really, really far away from the basketpic.twitter.com/dHusI9cHcW