Look, this is the last post I’m writing in 2019 and I’m tired. But I can’t let the year close without taking stock of how well tech stocks did this year. It was bonkers.

So let’s mark the year’s conclusion with some notes for our future selves. Yes, we know that the Nasdaq has been setting new records and SaaS had a good year. But we need to dig in and get the numbers out so that we can look back and remember.

Let’s cap off this year the way it deserves to be remembered, as a kick-ass trip ’round the sun for your local, public technology company.

We’ll start with the indices that we care about:

Next, the highest-value U.S.-based technology companies:

Now let’s turn to some companies that we care about, even if they are smaller than the Big Five:

The technology industry’s epic run has been so strong that The Wall Street Journal noted this morning that, powered by tech companies, U.S. stocks “are poised for their best annual performance in six years.” The Journal highlighted the performance of Apple and Microsoft in particular for helping drive the boom. I wonder why.

Public investors loved SaaS stocks in 2019, and startups should be thankful

But the worst trade in recent years has been the pessimists’ gambit. No matter what, stocks have kept going up, short-term hiccoughs and other missteps aside.

For nearly everyone, that is. While tech stocks in general did very well, some names that we all know did not. Let’s close on those reminders that a rising tide lifts only most boats.

Several of the most lackluster public tech companies were 2019 technology IPOs, interestingly enough. Who didn’t do well? Uber earns a spot on the naughty list for not only being underwater from its IPO price, but also from its final private valuations. And as you guessed, Lyft is down from its IPO price as well, which is not good.

Some 2019 IPOs did well in the middle of the year, but fell a little flat as the year came to a close. Pinterest, Beyond Meat and Zoom meet that criteria, for example. And some SaaS companies struggled, even if we think they will reach $1 billion in revenue in time.

But it was mostly a party. The public markets were good, and tech stocks were great. This helped create another 100+ unicorns in the year.

China’s Huawei is making a serious foray into the enterprise business market after it unveiled a new database management product on Wednesday, putting it in direct competition with entrenched vendors like IBM, Oracle and Microsoft.

Called the GaussDB, the database works both locally as well as on public and private clouds. When running on Huawei’s own cloud, GaussDB provides data warehouse services for customers across the board, from the financial, logistics, education to automotive industries.

The database launch was first reported by The Information on Tuesday citing sources saying it is designed by the company’s secretive database research group called Gauss and will initially focus on the Chinese market.

The announcement comes at a time when Huawei’s core telecom business is drawing scrutiny in the West over the company’s alleged ties to the Chinese government. That segment accounted for 40.8 percent of Huawei’s total revenues in 2018, according to financial details released by the privately-held firm.

Huawei’s consumer unit, which is driven by its fast-growing smartphone and device sales, made up almost a half of the company’s annual revenues. Enterprise businesses made up less than a quarter of earnings, but Huawei’s new push into database management is set to add new fuel to the segment.

Meanwhile, at Oracle, more than 900 employees, most of whom worked for its 1,600-staff research and development center in China, were recently let go amid a major company restructuring, multiple media outlets reported earlier this month.

Data provided to TechCrunch by Boss Zhipin offers clues to the layoff: The Chinese recruiting platform has recently seen a surge in newly registered users who work at Oracle China. But the door is still open for new candidates as the American giant is currently recruiting for more than 100 positions through Boss, including many related to cloud computing.

A pair of security researchers dominated Pwn2Own, the annual high-profile hacking contest, taking home $375,000 in prizes including a Tesla Model 3 — their reward for successfully exposing a vulnerability in the electric vehicle’s infotainment system.

Tesla handed over its new Model 3 sedan to Pwn2Own this year, the first time a car has been included in the competition. Pwn2Own is in its 12th year and run by Trend Micro’s Zero Day Initiative. ZDI has awarded more than $4 million over the lifetime of the program.

The pair of hackers Richard Zhu and Amat Cam, known as team Fluoroacetate, “thrilled the assembled crowd” as they entered the vehicle, according to ZDI, which noted that after a few minutes of setup, they successfully demonstrated their research on the Model 3 internet browser.

The pair used a JIT bug in the renderer to display their message — and won the prize, which included the car itself. In the most simple terms, a JIT, or just-in-time bug, bypasses memory randomization data that normally would keep secrets protected.

Tesla told TechCrunch it will release a software update to fix the vulnerability discovered by the hackers.

“We entered Model 3 into the world-renowned Pwn2Own competition in order to engage with the most talented members of the security research community, with the goal of soliciting this exact type of feedback. During the competition, researchers demonstrated a vulnerability against the in-car web browser,” Tesla said in an emailed statement. “There are several layers of security within our cars which worked as designed and successfully contained the demonstration to just the browser, while protecting all other vehicle functionality. In the coming days, we will release a software update that addresses this research. We understand that this demonstration took an extraordinary amount of effort and skill, and we thank these researchers for their work to help us continue to ensure our cars are the most secure on the road today.”

That’s a wrap! Congrats to @fluoroacetate on winning Master of Pwn. There total was $375,000 (plus a vehicle) for the week. Superb work from this great duo. pic.twitter.com/Q7Fd7vuEoJ

Tesla has had a public relationship with the hacker community since 2014 when the company launched its first bug bounty program. And it’s grown and evolved ever since.

Last year, the company increased the maximum reward payment from $10,000 to $15,000 and added its energy products as well. Today, Tesla’s vehicles and all directly hosted servers, services and applications are now in scope in its bounty program

Oracle today announced that it has made another acquisition, this time to enhance both the kind of data that it can provide to its business customers, and its artificial intelligence capabilities: it is buying DataFox, a startup that has amassed a huge company database — currently covering 2.8 million public and private businesses, adding 1.2 million each year — and uses AI to analyse that to make larger business predictions. The business intelligence resulting from that service can in turn be used for a range of CRM-related services: prioritising sales accounts, finding leads, and so on.

“The combination of Oracle and DataFox will enhance Oracle Cloud Applications with an extensive set of AI-derived company-level data and signals, enabling customers to reach even better decisions and business outcomes,” noted Steve Miranda, EVP of applications development at Oracle, in a note to DataFox customers announcing the deal. He said that DataFox will sit among Oracle’s existing portfolio of business planning services like ERP, CX, HCM and SCM. “Together, Oracle and DataFox will enrich cloud applications with AI-driven company-level data, powering recommendations to elevate business performance across the enterprise.”

Terms of the deal do not appear to have been disclosed but we are trying to find out. DataFox — which launched in 2014 as a contender in the TC Battlefield at Disrupt — had raised just under $19 million and was last valued at $33 million back in January 2017, according to PitchBook. Investors in the company included Slack, GV, Howard Linzon, and strategic investor Goldman Sachs among others. 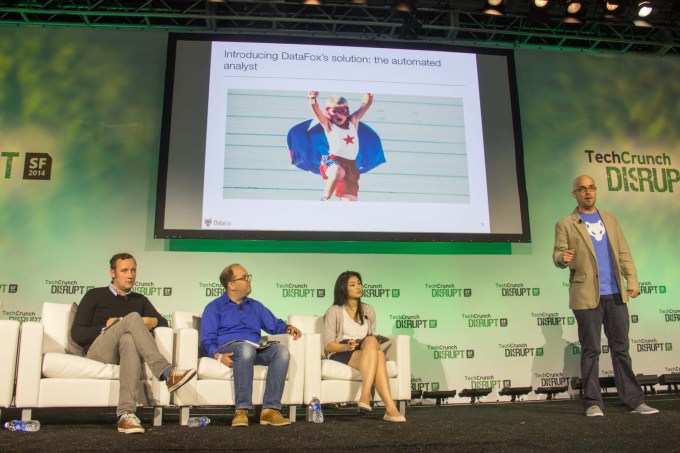 Oracle said that it is not committing to a specific product roadmap for DataFox longer term, but for now it will be keeping the product going as is for those who are already customers. The startup counted Goldman Sachs, Bain & Company and Twilio among those using its services.

The deal is interesting for a couple of reasons. First, it shows that larger platform providers are on the hunt for more AI-driven tools to provide an increasingly sophisticated level of service to customers. Second, in this case, it’s a sign of how content remains a compelling proposition, when it is presented and able to be manipulated for specific ends. Many customer databases can get old and out of date, so the idea of constantly trawling information sources in order to create the most accurate record of businesses possible is a very compelling idea to anyone who has faced the alternative, and that goes even more so in sales environments when people are trying to look their sharpest.

It also shows that, although both companies have evolved quite a lot, and there are many other alternatives on the market, Oracle remains in hot competition with Salesforce for customers and are hoping to woo and keep more of them with the better, integrated innovations. That also points to Oracle potentially cross and up-selling people who come to them by way of DataFox, which is an SaaS that pitches itself very much as something anyone can subscribe to online.