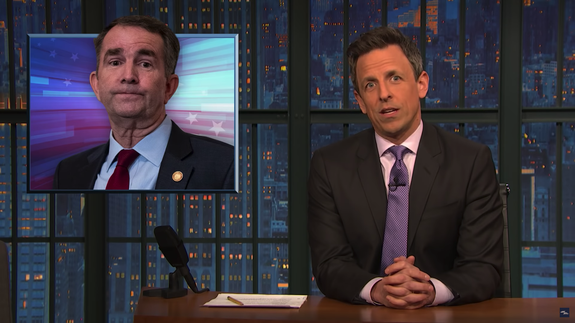 After a racist photo on his 1984 yearbook page surfaced on Friday, Virginia Governor Ralph Northam was called on to resign. So, he held a press conference to prove he’s not a racistIt didn’t go well.

It was almost too easy for Seth Meyers, who took “A Closer Look” at the controversy on Monday, and in particular, the governor’s backtracking on whether the image of a man wearing blackface, and another wearing a Ku Klux Klan hood, actually featured him.

After apologising for being in the photo, Northam later changed his story, claiming he knew he wasn’t in it. Why? He pointed to another time he wore blackface, when he performed a Michael Jackson routine in a dance contest. Really. Read more…

Gab, the far-right social network that the suspect in Saturday’s mass shooting at Pittsburgh synagogue used to share anti-Semitic posts, has gone offline after GoDaddy gave it 24 hours to find a new domain provider. GoDaddy’s decision comes after PayPal, Medium, Stripe, and Joyent banned Gab’s accounts over the weekend.

Bowers may face the death penalty after being charged with 11 counts of murder and multiple hate crimes in connection to the attack on the Tree of Life synagogue in Pittsburgh, which the Anti-Defamation League said it believes is the deadliest against the Jewish community in U.S. history.

On his Gab profile, Bowers had written “jews are the children of satan” in his biography and repeatedly shared anti-Semitic content and other hate speech. Shortly before the shooting, Bowers allegedly wrote “HIAS [an organization that aids Jewish refugees] likes to bring invaders in that kill our people. I can’t sit by and watch my people get slaughtered. Screw your optics, I’m going in.”

In an emailed statement, a GoDaddy spokesperson said Gab was told to move after breaking the domain registrar’s rules against violent content:

“We have informed Gab.com that they have 24 hours to move the domain to another registrar, as they have violated our terms of service. In response to complaints received over the weekend, GoDaddy investigated and discovered numerous instances of content on the site that both promotes and encourages violence against people.”

Gab now displays a message claiming it “is under attack” and has been “systematically no-platformed by App Stores, multiple hosting providers, and several payment processors.”

This is not the first time Gab has run afoul of its online service providers. Last year, Gab was banned from the Apple app store and Google Play for content violations. In August, Microsoft threatened to boot it from Azure web services if two anti-Semitic posts were not removed (the posts were taken down and Microsoft continued serving Gab).

After being suspended by Joyent, Gab said through its Twitter account that it would “likely be down for weeks,” but later tweeted that it would “be back soon.”

Urban Dictionary has made its name through user-submitted definitions, explaining words which normal dictionaries don’t.

While this freedom allows the site’s users to explain the most vulgar of slang, it’s opened the doors for egregiously racist and discriminatory definitions of regular words.

As reported by Junkee, an online campaign spearheaded by the Facebook page Blackfulla Revolution appears to have been successful in forcing the site to remove offensive definitions of the word “aboriginal.”

These definitions were specifically targeted at Indigenous Australians, and were prevalent on the majority of the word’s entries up until recently.  Read more… Anuja Ravindra Dhir, the first non-white circuit judge at the Old Bailey, says “she was often mistaken for a witness or defendant when she started working as a lawyer” in the 1980s.

The 49-year-old said at first, most clients did not want to be represented by a young Asian Scottish female.

She also said that, when she wanted to go to university in the 1970s, she was told to be a hairdresser instead.
…

Judge Dhir said she once had to produce her wig and gown before security allowed her into court.
“I got used to turning up at courts and people saying to me ‘Witness? – no – Defendant? – no’ and looking rather surprised when I said I was the advocate,” she said.

Now the youngest Central Criminal Court justice, she talks of the “incredible changes” over the last 30 years.

“There is one glass ceiling that’s in our minds, that’s what we think we can achieve so perhaps we impose our glass ceiling and that has happened to me several times.”

The Old Bailey houses 15 judges, of whom 10 are men and five are women, including one who is due to start soon. And of the recent intake of Old Bailey judges, three out of six are women.

Judge Dhir said: “Child-friendly policies I think are important. As a society we are better at raising that now than we ever have been before.”

She praised the Recorder of London, Judge Nicholas Hilliard QC, for his commitment to change at the Old Bailey, a building steeped in history and tradition dating back to medieval times.

She said: “I’ve been overwhelmed by the commitment to change that I have seen people here at the Old Bailey have.

You don’t need to be a genius to figure out that putting the words “white” and “purity” together is problematic, what with white supremacy and all.

Yet beauty brand Nivea slapped a “white is purity” slogan on one of its recent advertisements. A move they’re now presumably regretting.

The ad for its invisible deodorant was posted on the brand’s Facebook page, geo-targeted at followers in the Middle East, according to the BBC.

An elitist, racist dating app is making waves in Singapore — and its founder is defending it vehemently.

Herbert Eng is calling his app HighBlood. It promises to filter people based on “accountant-verified information” covering income, profession, and university education.

A week ago, it made a Facebook post advertising itself. In the text, it says the app promises “quality”, and specifies that it will exclude “banglas”, “maids”, and “uglies.”

The post was spotted by journalist Kirsten Han, who tweeted: “I have no words”: Read more… Celestine Omin is a Nigerian software engineer who works for Mark Zuckerberg and Priscilla Chan’s company Andela, founded to give talented African coders an entree into the leading American tech firms; this week, he flew to the USA on a B1/B2 visa to meet with the company, but he found himself detained at the border.
(more…) This has not been a good week for Donald Trump. Today, seemingly at random, the FBI released hundreds of pages of documents related to the 1970s investigation into racial discrimination at Trump Management Company. The firm rented out apartment homes in New York, and was founded by President Donald Trump’s late father, Fred. The young Donald J. Trump carried on his dad’s legacy, in every respect.

“This release consists of FBI materials on an investigation conducted between 1972 and 1974 into allegations that the Trump Management Company had discriminated against applicants for apartment rentals on account of their race,” reads the introductory statement on the FBI.gov records archive.

The files contain 389 pages of interviews, notes, and other material generated by or used by the Justice Department in its 1973 housing racial bias case in New York against Fred Trump and his son, Donald J. Trump.

One affidavit from an unnamed former Trump Management employee, who said that he had been fired, said that Fred Trump told him “it was absolutely against the law to discriminate” but later told him “he also wanted to get rid of the blacks that were in the building.”

Trump and his father settled the case in 1975 without admitting wrongdoing, but they were required to take out advertisements saying they welcomed renters of all races. Trump said in an interview with The Post last year that he believed the charges brought against him and his father were unfair, and that the company never discriminated.

An earlier Washington Post piece with background on the 1973 legal matter is here.

Politico reported that a man who had once worked as a doorman at a Trump property during that era said his supervisor told him to tell potential black tenants the rent was “twice as much as it really was, in order that he could not afford the apartment.” Alexander MacKinnon thought it would be “my word against hers” after he directed racial abuse at Sanaa Shahid on a train out of London—the sneering solicitor said she shouldn’t be in the country, let alone first class. Unfortunately for him, he was overheard. The train guard then approached MacKinnon and told him: “It’s not just your word against hers, it’s mine as well because I heard it all.”

The guard added: “We’re not going to accept it. You’re drunk and racist and you need to get off the train.”

Writing on her Twitter page, Mrs Shahid said she could not speak highly enough of the train manager who helped her and her son.

She added: “Sat with us until the guy was taken off by [British Transport Police]”.

Donald J Trump’s executive order banning Muslims from entering the US threw the world into chaos yesterday, as US citizens, lawful permanent residents and visa holders found themselves stranded abroad, detained at airports on arrival to the USA, or helplessly waiting outside immigration checkpoint for news of sick and vulnerable family members who were held incommunicado by US immigration officials who refused to obey a US federal court order.
(more…) My friend Michelle Fox spotted this vehicle in New Mexico. The “non-racist” really makes it!

Dark parts of American history are often swept under the rug for being too shameful and painful. But engaging with that history is crucial to understand the present — and figure out how to move forward.

A new website, called Monroe Work Today, is bringing the harrowing history of lynching in the United States out of the shadows. Its detailed map and other resources document the names and experiences of nearly 5,000 people of color who were killed between 1835 and 1963.

“History class taught you the tip of the iceberg,” the site reads. “Every citizen has a duty to know this story. This history belongs to everyone.” Read more…