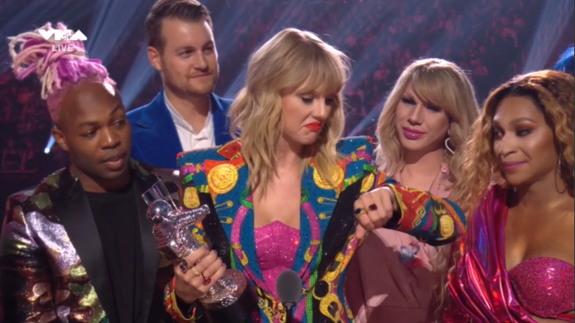 As per Rolling Stone, at Taylor Swift’s Rose Bowl concert in May, a kiosk was set up where it was playing clips of the pop star’s rehearsal.

Little did concertgoers know was that a camera was hiding behind the kiosk’s screen, where a facial recognition camera was snapping photos and transferring them to a Nashville-based “command post.”

The images were then checked with a database of the singer’s known list of stalkers, which numbers in the hundreds. Read more…

Squad, Taylor Swift’s reputation has landed, and it was never going to be without a few swipes.

The pop mogul’s highly anticipated sixth studio album has dropped, with one of the tracks generating a significant amount of buzz, “This Is Why We Can’t Have Nice Things.”

SEE ALSO: Ed Sheeran ‘raps’ on Taylor Swift’s ‘reputation’ and Twitter is having none of it

Co-written with producer pal Jack Antonoff, the track appears to make a few digs at the rapper, who Swift has had a complicated friendship with over the last few years, from the 2015 Grammys to the West’s “Famous” lyric, right up until that phone call. Read more…

Taylor Swift has been sorted into Slytherin, and she’s bringing a new banger to their house parties.

If the snake videos weren’t enough of a clue, Taylor’s enemies have driven her to a poisonous place — or so she’d have us believe. “Bad Blood” will go down as a bratty tiff compared to “Look What You Made Me Do,” a message from the all-new Taylor Swift, a first offering from Reputation that’s dripping with lethal venom.

“I’m sorry, the old Taylor can’t come to the phone right now,” she sarcastically snarls during the break. “Why? Oh! ‘Cause she’s dead!”

More about Taylor Swift, Game Of Thrones, Look What You Made Me Do, Entertainment, and Celebrities