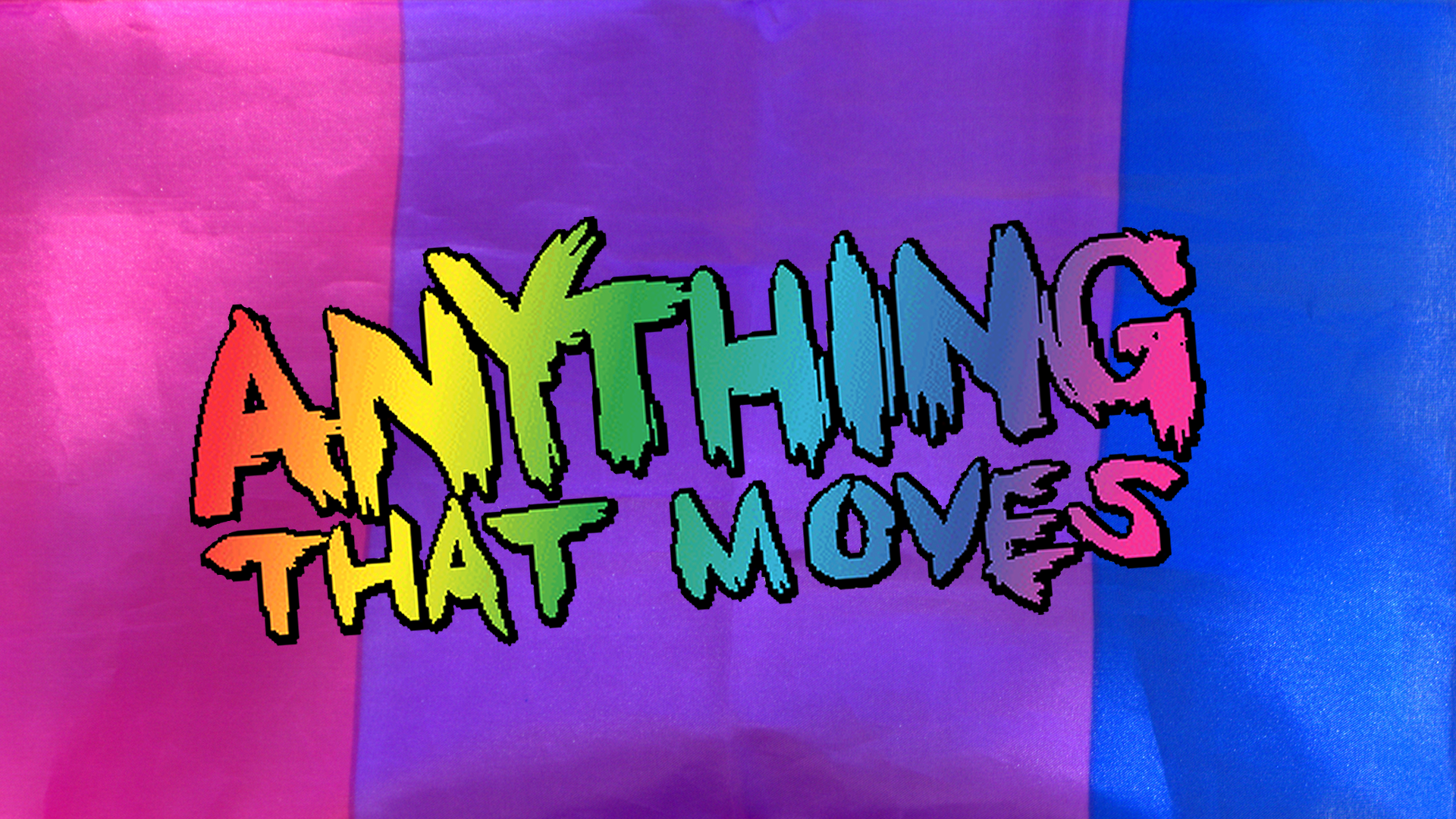 “We are challenging people to face their own external and internal biphobia. We are demanding attention. We are redefining ‘anything that moves’ on our own terms.”

So declares the introduction to Anything That Movies, a bisexual zine that ran from 1991 to 2001. Founded by editor and photographer Karla Rossi, Anything That Moves got its name from the stereotype that bisexual people will sleep with “anything that moves,” and it sought to redefine these and other assumptions about bi people in its decade-long run.

All 22 issues of Anything That Moves are now archived by a group of young bisexual people and allies. Not only does the archive introduce a new generation to a rare instance of bi-focused writing, but it’s also shockingly relevant to issues bi people face today.

Snippets of the introduction have circulated the internet in recent years, and they’re referred to as the ATM “manifesto” on its website. The words caught the attention of bi writer Kravitz Marshall, but he had never seen other material from the zine.

In 2020, Marshall found the Anything That Moves website, a relic of the early 2000s with an incomplete archive. He then bought issue #16 from Bolerium Books, a source for out-of-print books and material related to social movements. Marshall scanned each page of the issue and uploaded it online for free; he had planned on doing this for all issues of Anything That Moves, but acquaintances on a bisexual Discord server expressed interest in helping. The discussion grew so much that they created a separate server.

“It was the first time I became aware such a thing existed and I became very excited at the thought of finding and reading more copies,” said Jo, a bi femme activist who became involved in the project and now helms the archive email.

How to flirt when you’ve just come out as bi

The group found issue #2 via Reddit, but believed finding all the issues would be a difficult process — until a member of the now-inactive archive server was able to gather PDFs of every issue through her university library.

“It was thrilling and such a relief,” Marshall told Mashable, “because had this not happened, we might’ve had to do it the hard and expensive way.”

“It happened so fast,” Jo recalled. “I just remember about seven bisexuals, including Krav and myself, putting our heads together to figure out the best way to get our hands on all these copies and how to share them with the rest of the LGBTQ community.”

Now, the work of Marshall, Jo, and a group of bi people and allies is gathered in the archive.

Joy and heartbreak of Anything That Moves

Reading through the archive is, personally, an ambivalent experience. Anything That Moves began before I was even born, and I feel kindred reading this decades-old work; it’s like reading discussions I’ve had with bi friends back to me. The articles, reviews, fiction, and poetry in discusses visibility, (non)monogamy, the inclusion of trans people in bisexuality — to name merely a few topics still pertinent today.

Despite the joy of reading this bi-centric work, however, it’s telling how little has changed since 1991.

Jo, who grew up in a conservative area, found the zine refreshing and comforting. “Even when you discover/read/watch anything regarding LGBTQ history, it’s very rare for any specific focus to be given to the bisexual community,” they said. “Finding Anything That Moves was a shock to my system.”

Marshall was touched by the “unfiltered life” within its pages. “There’s urgency, there’s knowledge, there’s joy, there’s righteous rage, there’s lust,” Marshall said, “and you don’t have to go searching between the lines for it — it grabs your shoulders and shakes you until you reach the back cover.”

Despite the joy of reading this bi-centric work, however, it’s telling how little has changed since 1991.

For Jo, the experience of reading Anything That Moves has been both special and heartbreaking. “A lot of the subject matter is stuff that the bi community has been dealing with forever,” they said. “The same stereotypes and heterosexism that bisexuals faced nearly thirty years ago are still very prevalent today.”

“It really hits you that virtually nothing has changed about the outside perception of bisexuality and bisexuals,” Marshall agreed. “Almost every single issue we grapple with now is a hand-me-down.”

He pointed to a piece in the inaugural issue called “This Poem Can Be Put Off No Longer” to display his point. Here are the first few stanzas: 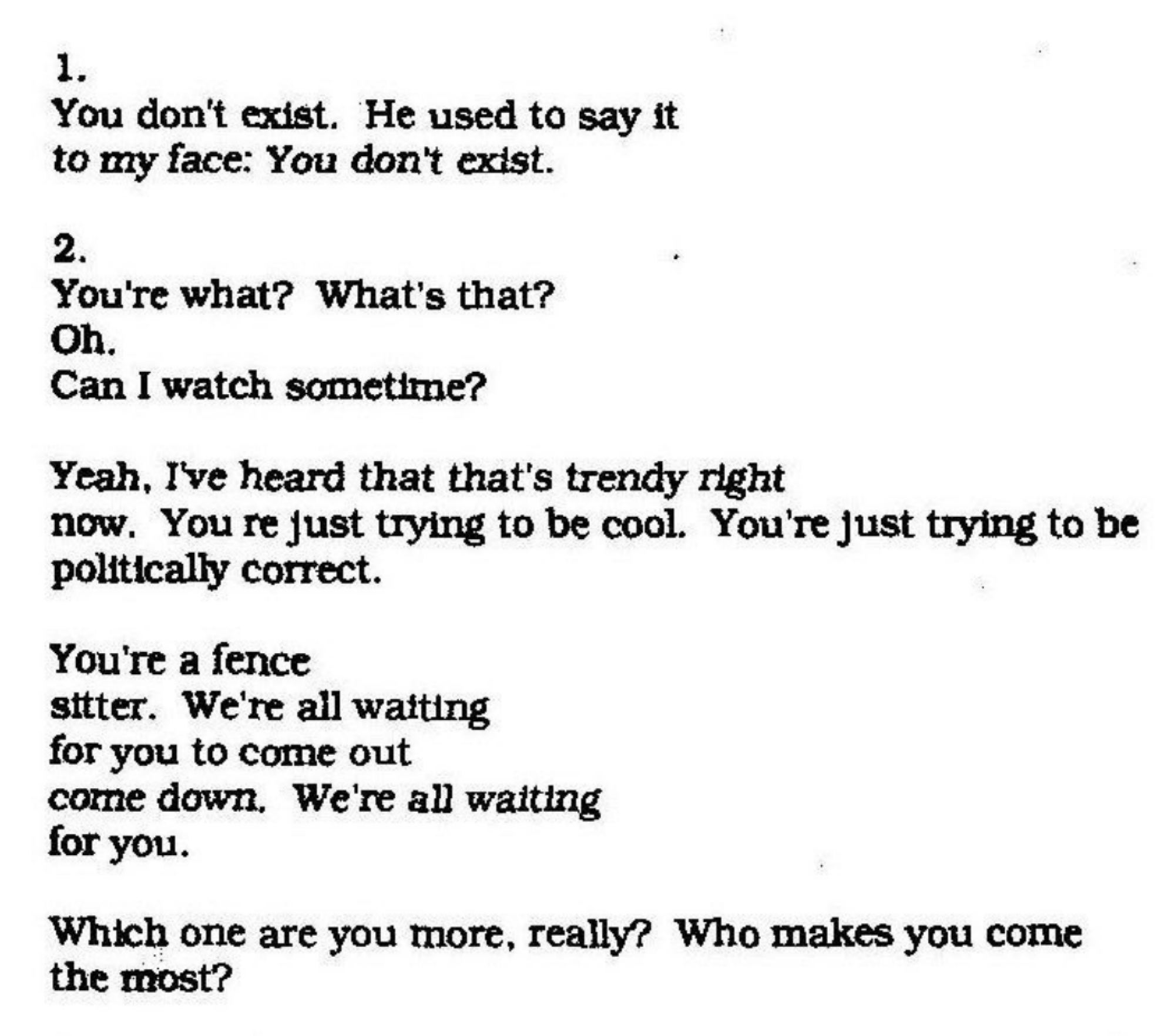 The poem continues, but the point is clear from the start: Bisexual people aren’t believed for who they are. They’re belittled and told to “choose a side,” that they’re bisexual for attention. It’s difficult to think that this poem is over 30 years old.

The poem “truly could’ve been written yesterday… or 50 years ago,” said Marshall. “How long do we have to keep screaming the same things to the world over and over until people stop pretending we’re speaking another galaxy’s language?”

The stagnancy of the world’s perception of bisexual people infuriates Marshall, he said, but it’s imperative to still talk about these issues. “You can’t just stop talking about these issues, so you just say the same things, because the world that needs to listen to you refuses to move on. And I’m not a fan of repeating myself,” he said. “You just feel like you’re going crazy.”

The solace of Anything That Moves, however, is that even though progress has been slow, fellow bisexual people can relate to the shared experience detailed in its pages.

“How long do we have to keep screaming the same things to the world over and over until people stop pretending we’re speaking another galaxy’s language?”

After Jo came out, for example, they internalized that being bi made them “second-rate.” They didn’t feel welcome in cisheterosexual circles nor LGBTQ circles, a common feeling for bisexual people who feel like they’re straddling both. Searching for issues of Anything That Moves, part of bisexual history, helped Jo connect with other bi people. Being able to meet others facing the same issues, and sharing this historical information and searching for more, has made the biggest impact on them and their identity.

“I don’t feel as alone as I once did because bisexuals of today wanted to learn more about their bisexual elders,” they said.

Those who have found the archive have also felt that connection. The archive team has received waves of emails, messages, and followers — some wanting to help, others thanking them.

“For the most part, people are just delighted to finally get to read the magazine,” Marshall said.

Even this positive feedback echoes the sentiment of the time. Readers wrote to Anything That Moves, and some of those letters are published in subsequent issues. “You can see so clearly how life-changing these publications were to some people,” Marshall said, “so thank God it was brought to the world.”

“It’s something I definitely needed when I was a closeted, bisexual teenager.”

The archive has helped current bi readers ground in their bisexuality, Jo said. The archivists even connected with some former Anything That Moves editors, who discovered them through the project. “I’m just happy we got a chance to say thank you for everything they left for us to discover,” Jo said.

There’s still work to be done for the archive, like transcriptions for easier reading and sharing. Some people involved even planned on making an original virtual bi zine, Marshall said, but due to personal commitments, the idea fizzled out within months.

“I still hope it’ll exist one day,” Marshall said. “If by some miracle the future grants me that wish, I won’t reveal its title, but I find it pleasantly cheeky.”

For now, of course, there’s nearly two-dozen issues of Anything That Moves. Jo believes the zine is a gift.

“I want to be able to share this gift with anyone else who may need it,” they said. “It’s something I definitely needed when I was a closeted, bisexual teenager.”