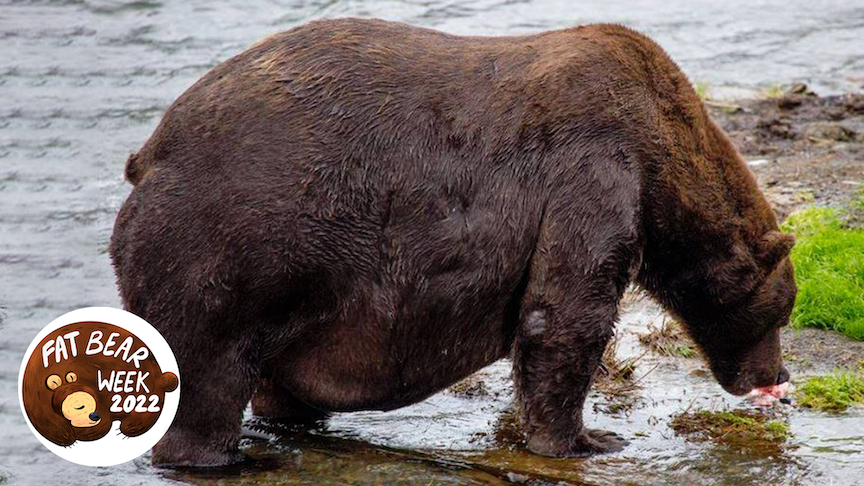 They’re the internet-famous bears of Katmai National Park and Preserve, and they grow impressively fat over the summer on the livestreamed explore.org wildlife webcams. Many of these bears — like the singular, persevering Otis — return to feast on calorie-rich salmon in the park’s Brooks River each year. Katmai celebrates the success of these wild animals by hosting an annual Fat Bear Week contest in the early fall.

In reality, every bear is a winner for surviving in the harsh northern wilderness. But the public (that means you) gets to vote online for the fattest bear in a light-hearted tournament. It’s a superb way to learn about the fascinating lives of these animals, and how they thrive.

After months of chomping salmon, there are always some extremely daunting ursine competitors by October. In 2022, however, the competition is so stiff, there’s no clear favorite. You can see these rotund bears in the images below.

“Some of the choices are going to be really hard,” said Fitz, who authored a book on these animals called The Bears of Brooks Falls. “This is going to be one of the more exciting competitions.”

“This year the tournament is pretty wide open.”

The bears are fat because they live in an untrammeled, flourishing ecosystem. Dams, mines, and development haven’t destroyed the natural bounty there — though the Trump administration attempted (and failed) to give a company the chance to construct an unprecedented mining district in the region. The foundation of this habitat — salmon — flourish in the area’s rivers and streams. The fat bears thrive because the salmon thrive.

The female fat bear that’s as dominant as the big, bad male bears

“None of this would happen without the fish,” Fitz emphasized.

In 2022, Alaska’s Bristol Bay watershed, home to a vast network of largely protected waterways, saw its largest ever historical run of salmon. Many of these fish swam up a primary river that feeds into Katmai. The bears devoured the salmon on the livestreamed webcams. 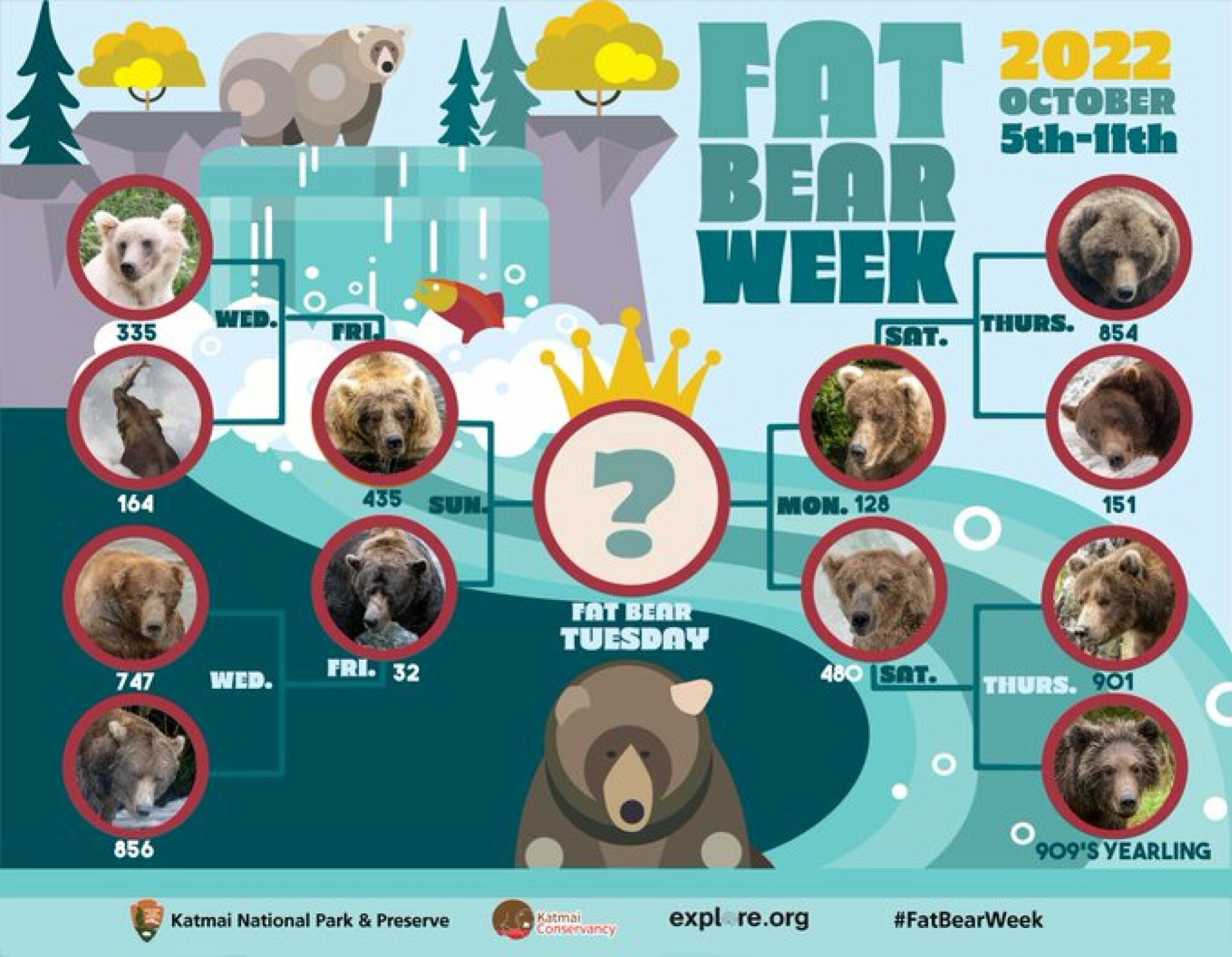 
Tweet may have been deleted
(opens in a new tab)

Holly is a former Fat Bear Week champion who has successfully raised many cubs — and even adopted one. 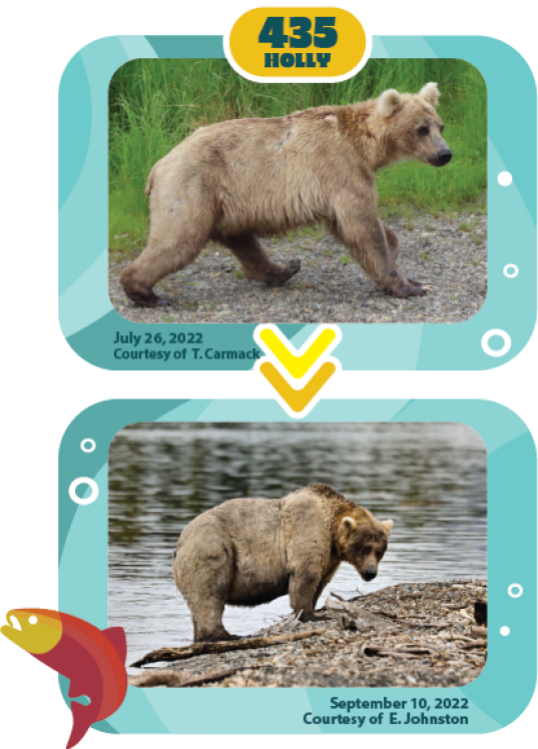 For much of the past decade, bear 856 has been the most most dominant and aggressive bear of Katmai’s Brooks River. He still one of the most dominant bears in the Katmai hierarchy, though the colossal bear 747 (detailed below), is currently the top bear. 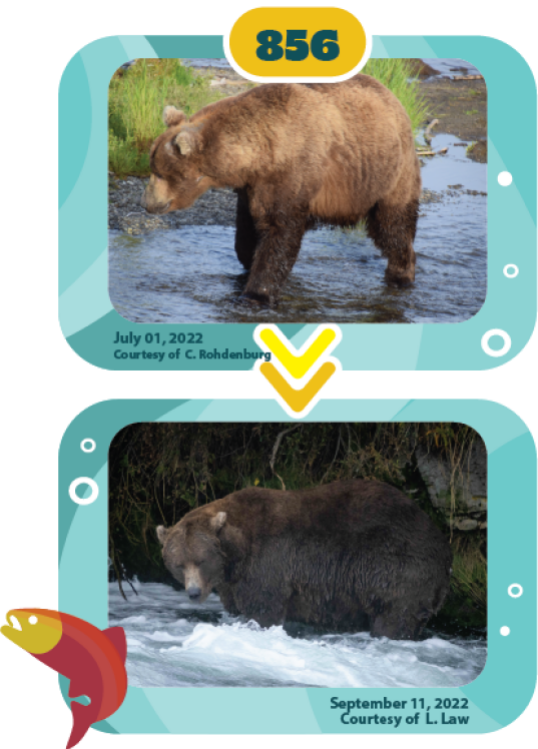 Bear 747 is the largest bear many Katmai park rangers have ever seen. He’s a former Fat Bear Week champion. “He seems to be more hippopotamus than bear at times,” a ranger once told Mashable. 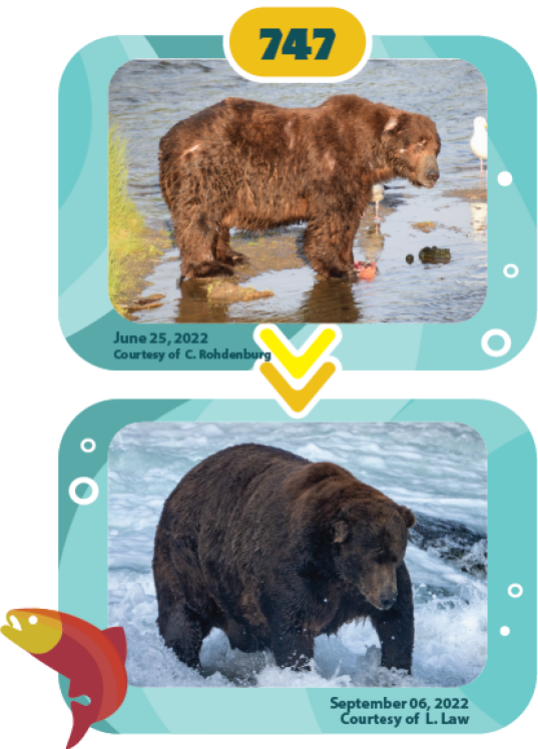 Grazer is an especially fierce bear who vigilantly protects her young. She’s one of the river’s most dominant bears. 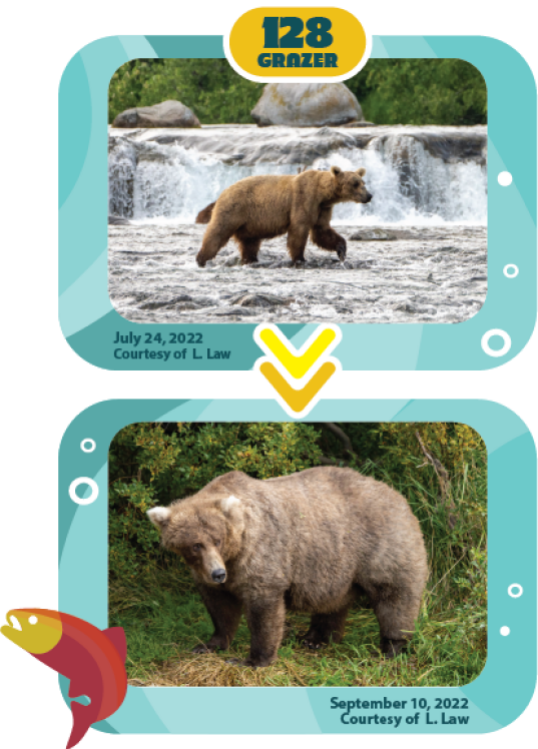 Otis, a multiple Fat Bear Week victor, may be the most famous bear on Earth. He’s often conspicuous on the livestreamed bear cams, patiently waiting to catch passing salmon. In 2021, he was the champion we all needed. 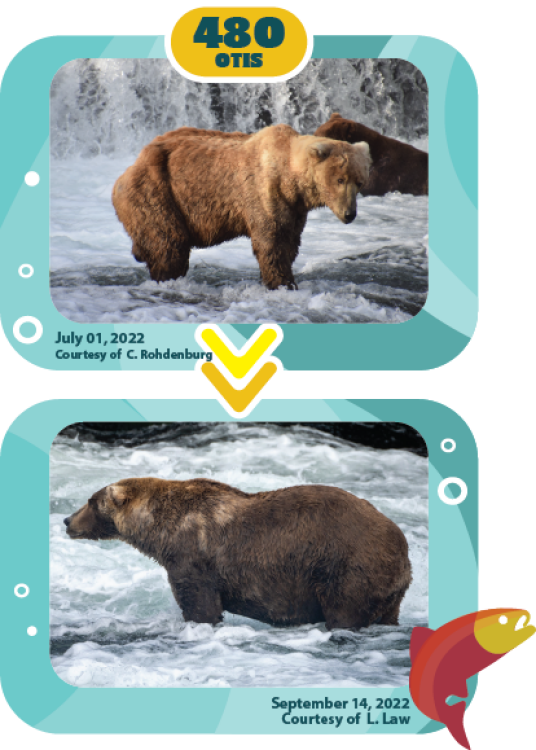 Walker has grown into one of the most assertive and largest bears of the river. He’s leading a new generation of Katmai’s fat bears. He’s known for putting a lot of weight on his hind quarters. 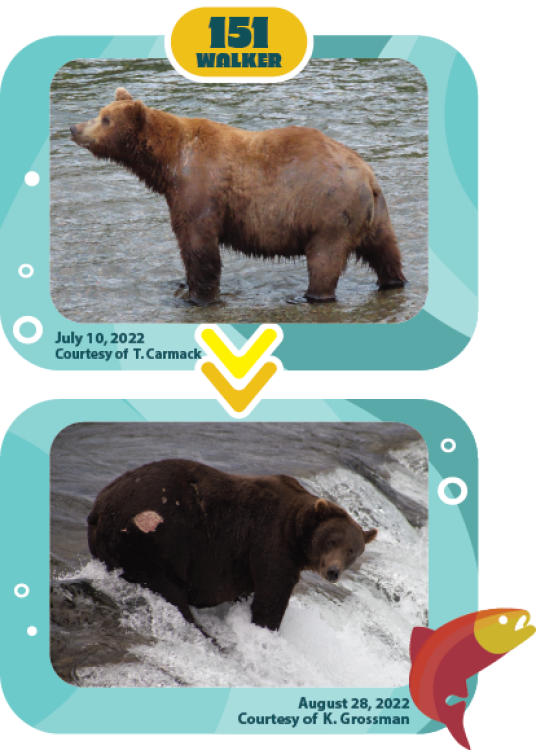 Chunk is an extremely large male bear, often seen with scars on his face and body. Few bears can intimidate Chunk from the best fishing spots in the river. 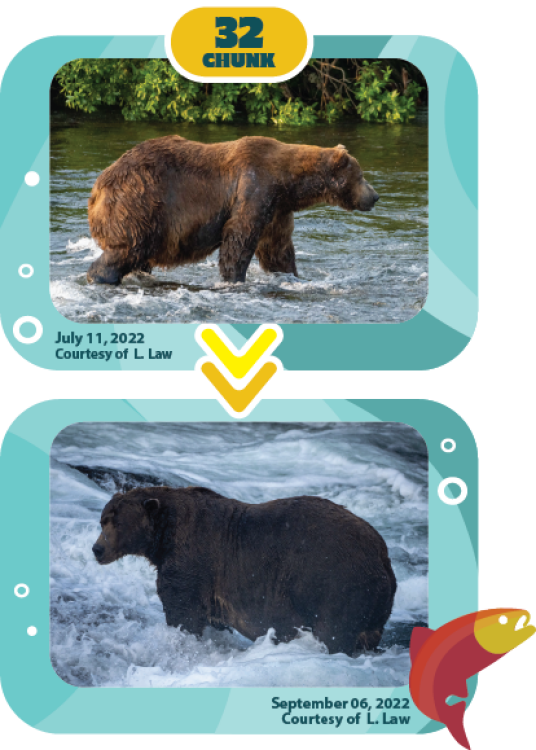 This is bear 909’s yearling cub, which means the cub is in its second year of life. The cub grew particularly chonky this summer. 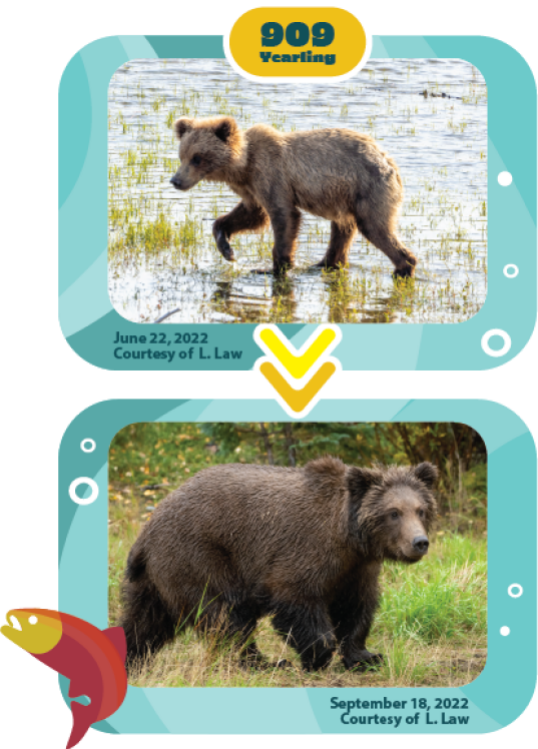 Bear 335 is a young bear, the offspring of Katmai legend Holly (above). 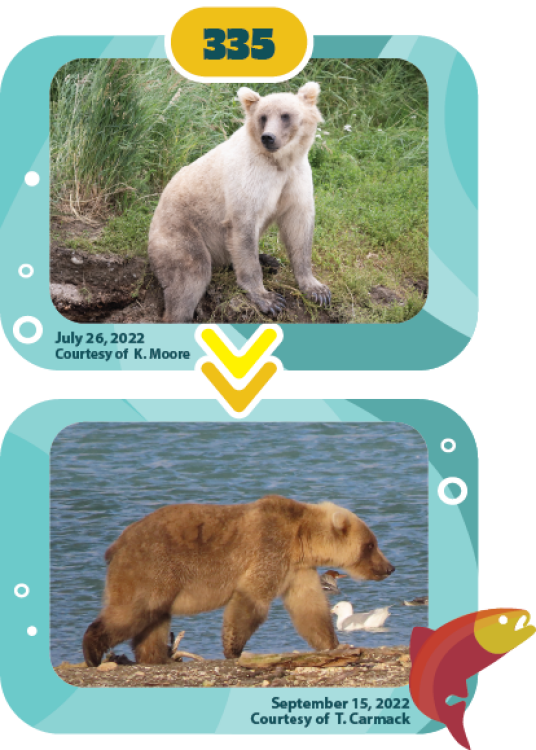 Bear 164 isn’t one of the most dominant males. But he’s still excellent at catching fish in areas where the most dominant bears aren’t fishing. “Through innovation, bear 164 carved himself a unique niche at Brooks Falls,” explore.org wrote online. 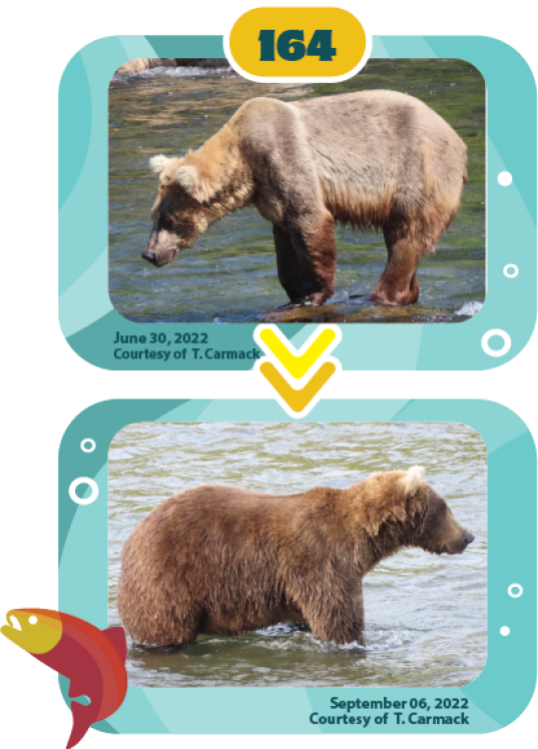 Divot emancipated two cubs this summer, meaning they were old enough to survive on their own. Divot didn’t have to share fish with her helpless cubs, and grew profoundly fat. She’s is a smart, intelligent bear that earns the right to fish some of the river’s best spots. 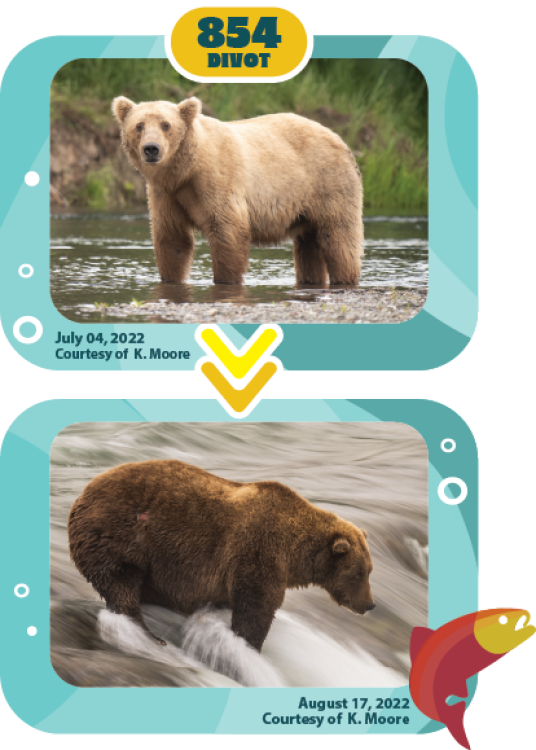 Katmai rangers describe 901 as “fiercely independent.” She’s one of the bulkiest sows spotted this season. 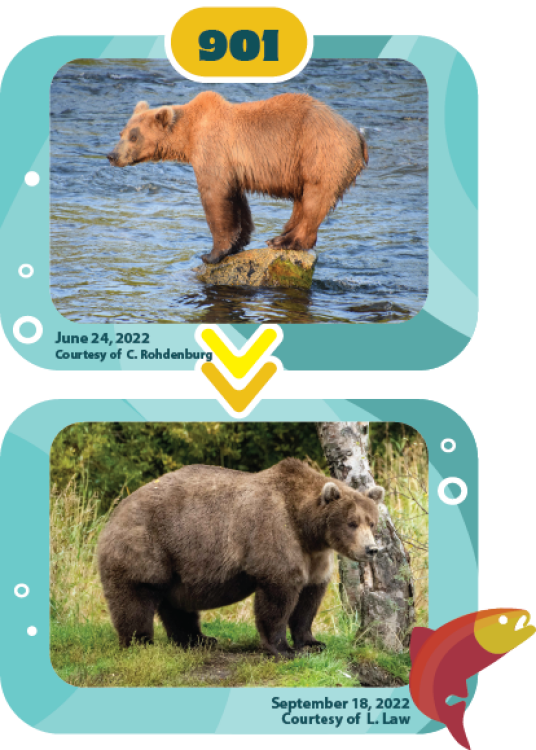